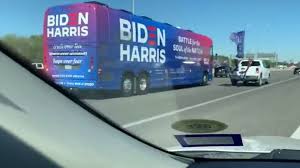 By Kate McGee, Jeremy Schwartz, and Abby Livingston at the Texas Tribune and Propublica, October 31, 2020

The Federal Bureau of Investigation is looking into a Friday incident in which a group of Trump supporters, driving trucks and waving Trump flags, surrounded and followed a Biden campaign bus as it drove up I-35 in Hays County, a law enforcement official confirmed to The Texas Tribune Saturday.

The confrontation, captured on video, featured at least one minor collision and led to Texas Democrats canceling three scheduled campaign events on Friday. The campaign officials cited “safety concerns” for the cancellations.

The highway skirmish came as Democrats close ground in a state that is polling like a potential battleground in the race for president. Recent polls indicate the presidential race in Texas between President Donald Trump and Joe Biden is tight, with some national prognosticators calling it a “toss-up.”

“Rather than engage in productive conversation about the drastically different visions that Joe Biden and Donald Trump have for our country, Trump supporters in Texas [Friday] instead decided to put our staff, surrogates, supporters, and others in harm’s way,” said Tariq Thowfeek, Texas communications director for the Biden campaign.

On Saturday night, Trump tweeted a video of the Trump supporters following the Biden bus saying, “I LOVE TEXAS!”

When reached for comment, the Texas GOP Chairman Allen West dismissed questions regarding the incident. “It is more fake news and propaganda. Prepare to lose … stop bothering me,” West said in a statement.

The bus tour was separate from vice presidential nominee Kamala Harris’ visit to the state Friday.

Texas congressional candidate and former state senator Wendy Davis was on the Biden bus at the time, according to multiple sources, including U.S. Rep. Lloyd Doggett, Travis County Democratic Party Chair Katie Naranjo and a now-deleted tweet from the Biden Operations Director for Texas, David Gins. A spokesperson for Davis declined to comment.

The tour, which started on Wednesday in Amarillo and went through East Texas, the Gulf Coast, along the Texas-Mexico border and Central Texas faced protests of varying sizes along the way.

Friday’s campaign events started with a small gathering in Laredo that was met with few protesters. From there, staffers drove to San Antonio. Around 12:30 p.m. on Friday, a social media user using the hashtag #TrumpTrainTexas posted on Twitter, “Trolling is FUN.” The user called for other Trump supporters to “escort the Biden [bus] coming through San Antonio.”

Eric Cervini, a volunteer for the Biden campaign who grew up in Round Rock and flew in from Los Angeles, said he was driving on I-35 from San Antonio to the next event when he saw a long line of 40 to 50 vehicles along the side of the highway with Trump and American flags.

Cervini told the Tribune that when he arrived in San Marcos, he started to hear from people on the bus that the Trump supporters had started following them closely, honking their horns and shouting. According to the Biden campaign, multiple trucks pulled in front of the bus and appeared to try to slow it down. The campaign canceled the event in San Marcos and proceeded directly to Austin where another event was scheduled at the AFL-CIO in downtown Austin.

A person with knowledge of the events who spoke to the Tribune on the condition of anonymity said New Braunfels police responded to requests for assistance and provided an escort throughout their jurisdiction. During that time, the person said, the group of Trump supporters fell back behind the police.

In a statement, New Braunfels City Manager Robert Camareno said the police department received calls “of the Trump Train following the Biden/Harris campaign bus … NBPD responded and did not observe any traffic violations.”

Naomi Narvaiz, a Texas Republican Party official in San Marcos, said Trump supporters formed the convoy after learning of the bus’s movements up the interstate on Facebook from fellow supporters in San Antonio.

“We decided we would jump on 35 to show support for our president,” she said. “I didn’t see anyone being overly aggressive.”

On Twitter, Narvaiz wrote: “We sent the @JoeBiden @KamalaHarris bus out of Hays! Your kind aren’t welcome here!”

“Those who fear their party is about to lose Texas resort to such desperate tactics. We have to stand up to these bullies just as we seek to protect the right of every last Texan to vote out the Bully-in-Chief,” Doggett said in a statement to the Tribune.

Naranjo, chair of the Travis County Democratic Party, said she was on the phone with a staffer on the bus who alerted her that they were being closely followed by a group of Trump supporters.

According to Naranjo, the staffer on the bus told her a truck collided with one of the staff member vehicles. Neither of the vehicles stopped. The collision was partially caught on video and posted on Twitter. The video does not show how the collision began.

As the bus continued to pass through multiple jurisdictions in Hays County, different police departments received reports about the caravan.

In a statement, the city of Kyle said police received a report that two or more vehicles may have made contact on Friday around 4 p.m. Officers responded to the area but no vehicles stopped to share information with law enforcement.

“From videos of the event that have now surfaced on social media, it appears that the vehicle contact actually occurred within San Marcos prior to the campaign bus arriving in Kyle,” a statement from the Kyle Police Department read. “All involved parties are being referred to the San Marcos Police Department should they desire to file any type of report with law enforcement.

A San Marcos spokesperson said police received a call from the Biden campaign bus requesting a police escort but weren’t able to catch up to the bus before it exited the city due to traffic. The police have not spoken to either driver about the collision and said they weren’t able to determine who was at fault.

According to Hays County Sheriff Gary Cutler, the Biden campaign did not notify his office that it would be passing through the county to allow law enforcement to prepare for any possible confrontations. “The planning of this was questionable,” said Cutler, a Republican running for reelection on Tuesday.

Travis County Precinct 4 Constable George Morales was at the AFL-CIO parking lot at 11th and Lavaca streets for a planned press conference and said the group initially tried to step on the property, but law enforcement asked them to stay on the sidewalk. He said the group was aggressively shouting but did not get physical.

The press conference was canceled as well as a subsequent campaign event in Pflugerville with the Austin Young Dems due to safety concerns.

State Rep. Sheryl Cole, D-Austin, shared the cancellation on Twitter, calling it a “first for her.”

“Unfortunately, Pro-Trump Protestors have escalated well beyond safe limits. Sorry to all who looked forward to this fun event.”