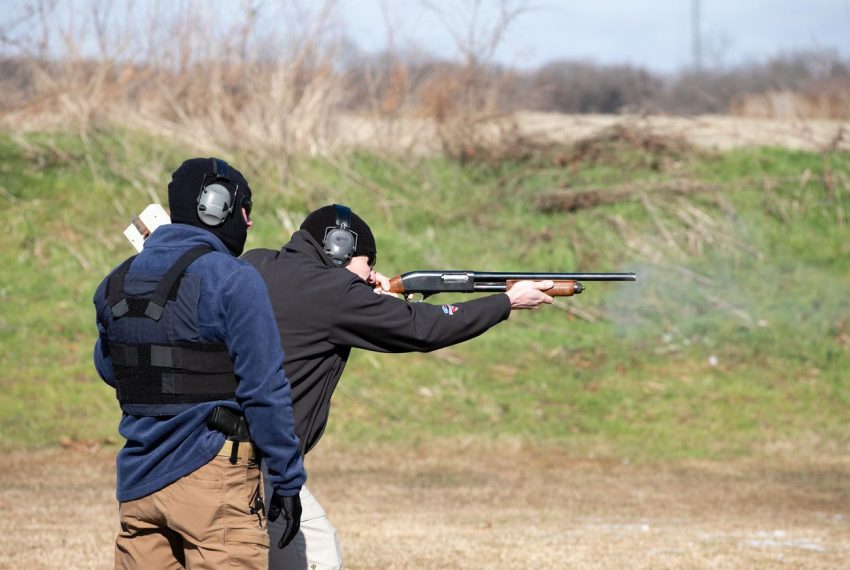 A member of a church security team fires at a target at a shooting range in Krugerville. Various church security teams are training for active shooter situations with the National Organization of Church Security and Safety Management.  Leslie Boorhem-Stephenson for The Texas Tribune

Texas has seen two mass shootings in churches in three years, which has some churchgoers exploring training programs to take down an attacker.

KRUGERVILLE — Liberty Hill resident T.J. Wagner yelled commands at his friend James Johnson in an empty classroom at a building in North Texas earlier this month: “Face the wall! Feet apart! Hands behind your back!”

Within seconds, Wagner handcuffed Johnson, leading him out of the room with one hand gripping the metal cuffs and the other squeezing his right bicep to guide him out. Then, the two switched places and it was Johnson’s turn to detain his buddy.

The pair were among a group of several men from across the state who enrolled in a training program this month where they practiced combat moves, learned how to apprehend suspects and shot firearms.

But they weren’t training for law enforcement.They’re just men who are worried about their churches.

They’re preparing for the worst-case scenario, one where their congregations are the target of a mass shooting — something that was almost unthinkable a few years ago but has happened twice in Texas in the past three years.

In November 2017, a gunman opened fire inside First Baptist Church of Sutherland Springs, killing 26 people and injuring 20 more. And last month, days after Christmas, a shooter attacked the West Freeway Church of Christ in White Settlement, killing two people and injuring one before being fatally shot by Jack Wilson, an Army veteran and head of the church’s volunteer security team.

A few days before he left for the training seminar, Wagner said a few friends asked him, “Do you think you need security at church?”

A couple days later, the shooting at White Settlement church happened, and one of those friends later told him he was right to attend.

“We’re seeing lots of other churches that had not thought about this are putting together security teams,” said Wagner, a member of Life Church in Leander, an interdenominational house of worship. “It’s a terrible thing that we have to do that, that you have to think about it, but it’s been proven over and over again, that it’s possible it could happen. So be proactive.”

Chuck Chadwick, the founder and president of the National Organization for Church Security and Safety Management, has been in the church security business for about 18 years, encouraging parishioners and worshippers to take their safety into their own hands. He’s experienced a spike in interest in recent weeks, following the White Settlement shooting, that mirrors the same interest his business got after Sutherland Springs.

In a one-story building in Krugerville, a city about an hour and a half north of Dallas, located next to a State Farm office and gun shop, attendees go through the same state-certification training as private security guards. Except at the end, instead of being paid to protect an office building, the participants will be volunteers protecting their flocks.

Members of church security teams from across Texas practice by shooting at targets in Krugerville. The security teams are training for active shooter situations with the National Organization of Church Security and Safety Management.  Leslie Borham-Stephenson for The Texas Tribune

Churches pay about $800 to fully certify and train each person through Chadwick’s school. The Chadwicks’ full program costs $620 and state licensing runs about $180.

In the classroom, Will Chadwick, Chuck’s son and the class instructor, described attack scenarios to a group of participants who attended in early January. He gave advice on what to do — but also, legally, what not to do.

Draw the assailant away from where children might be, he said.

Use words as your first line of defense.

Don’t handcuff an attacker to something and just walk away.

Throughout the training, Will Chadwick peppered the men with verbal pop quizzes to prepare them for the 100-question state exam that would come at the end of the program.

The second half of the training was more hands on. Will Chadwick, who typically spoke in a calm voice, barked his commands at the men.

He demonstrated hand-to-hand combat techniques and the proper way to strike a police baton.

Participants also shot a variety of handguns and shotguns as part of their certification at the company’s outdoor gun range.

The Chadwicks’ training prepares participants for violent attacks, but they said it would also come in handy for more common situations, like church parking lot thefts.

Many of the participants in the January class had enrolled before the shooting at White Settlement.

“It’s surreal that you’re coming in here and you’re training for what you hope never happens. And then the very next day, it happens,” said Jimmy Bills, a former Marine who lives in East Texas and attends Oasis Church of Round Rock. Bills was dressed in all black with a “Don’t tread on me” hat.

The average participant who attended the training was a man with former military or law enforcement experience.

“I’d rather have me doing it than somebody I don’t know,” said Larry Graves, a 65-year-old father of eight kids and Army veteran who traveled from Arlington.

Chuck Chadwick, 65, got his start in private security, working about 20 years at a high-end auction house based in Dallas, protecting fine art, gold coins and luxury goods.

But after the 9/11 attack on the World Trade Center in New York, he felt a calling.

In 2002, he went on to develop a security program for two megachurches in Texas and became their director of security.

Four years later, he started the National Organization for Church Security and Safety Management which has turned into a family business. Chuck Chadwick serves as president; his wife Marian is vice president and over logistics; and his son Will is the primary instructor and trainer.

“I saw there was a real need for a low-cost alternative to private security for churches,” Chuck Chadwick said.

His organization is one of a handful of Texas-based organizations that do security training specifically for churches. The Chadwick family business only works with “Judeo-Christian” organizations, Chuck Chadwick said.

Chuck Chadwick estimates that his business has certified about 500 licensed church security guards at almost 100 churches, mostly in Texas.

Though inquiries about the training program surge following news of mass shootings, only a fraction of people actually follow through, Chuck Chadwick said.

This time could be different, Chadwick said. Because there was video of the shooting, the visual may stick with them much longer, he said.

A video of the shooting in White Settlement shows a number of congregants drew their gun at the shooter, but it was Wilson, head of the church’s volunteer security team, who killed the shooter with one shot. Regarded as a hero by many, Wilson was awarded the first Governor’s Medal of Courage last week.

Had Wilson not intervened, the shooting “could have been so much worse,” said Frank Pomeroy, the pastor of the Sutherland Springs church and a state Senate candidate.

Pomeroy’s 14-year-old daughter was killed during the 2017 shooting, but the pastor stands firmly against increasing gun restrictions.

“We are God’s protectors, and to do so we need to be trained and we need to be armed with the capability to protect our sheep,” Pomeroy said.

For years, Texas churches were hindered from organizing volunteer security. They either had to pay for private security guards, or seek special permission from the state, an exemption that came with a $400 price tag.

Former state Rep. Matt Rinaldi, R-Irving, said he was inspired to introduce the legislation after discovering that though existing law had allowed congregants with licenses to carry firearms into churches, they weren’t allowed to organize into a volunteer security teams without paying the state.

Rinaldi’s bill went into effect a month before the mass shooting of the First Baptist Church in Sutherland Springs.

“There’s no doubt that what the law did was legalize what was done at White Settlement Church in forming a security team. Without the bill that passed in 2017, those individuals would not have been able to form a security team and then who knows what could have happened,” Rinaldi said.

That changed when a new law went in effect in September 2017.