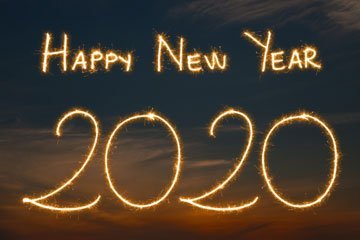 With the start of a new decade now upon us, Americans are feeling particularly good about closing out 2019 when it comes to their current and future financial situation. That said, many are vowing to make it a priority to reduce the burden of personal debt that they incurred this year.

According to Fidelity Investments’ 2020 New Year Financial Resolutions Study, 82 percent of respondents say they are in a similar or better financial position than they were in last year. Most credited their success to their own good habits – saving more (47 percent) and budgeting (29 percent) – rather than their investment gains (18 percent) from a stock market that made one high after another. Less than 25 percent put it down to having been able to work more hours in a strong economy.

And, as the study makes clear, they want to keep the momentum going.

Of the 67 percent considering making a financial resolution, “saving more” and “paying down debt” topped the list, respectively, at 53 percent and 51 percent.

“Living a debt-free life was the biggest motivator for them,” says Melissa Ridolfi, Fidelity’s vice president of retirement and college products.

Heck, given the choice between the classic New Year’s resolution of losing five pounds or socking away $5,000, a resounding 84 percent in the national survey of 3,012 adults opted for savings.

If you want to avoid the biggest and smallest mistakes that respondents made, read on:

So with all the interest in getting a grip on debt, who seems to be faring the best at it?

Boomers, the study finds, with 29 percent crediting being better off financially at year’s end to having refinanced, paid off, or reduced debts or loans. Generation X, the next oldest, trailed at 21 percent, followed by 19 percent of millennials, and just 6 percent of Generation Z.

“Boomers are getting the message that the closer they get to retirement, the more essential it becomes to get their debt under control to make the most out of retirement savings,” Ridolfi says.

Certainly there’s no law that says you have to make a New Year’s resolution – financial or otherwise – but even a huge chunk of those surveyed who weren’t contemplating explicitly doing so, still say they are planning on building up emergency funds. As for what you might call the “traditionalists” out there? Fidelity has some tried-and-true  tips that can help ensure your financial vows don’t wind up being among the 80 percent of all resolutions that U.S. News says, alas, fail by the second week of February.

The firm also has an impressive, free online “Moments” tool designed to help you plan for lifestyle changes or react to a myriad of curveballs – i.e., the unexpected medical expenses cited as a big setback in the study – that life throws at you. And accessing the Fidelity Retirement Score gives you a quick look at where you stand with your savings.

Oh, and here’s one last thing to see if you can relate: Seventy-eight percent of those surveyed predicted they’d be even better off financially in 2020.