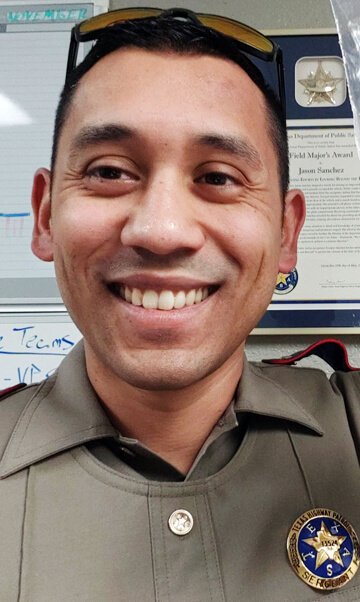 A local hero, DPS Sgt Jason Sanchez, is scheduled to speak at an upcoming Devine City Council meeting this October in a community outreach presentation regarding child trafficking. It’s a topic that is near and dear to his heart, as he was able to rescue a young girl from trafficking in May of 2015 in nearby Frio County.

In May of 2015, Sgt. Sanchez stopped a vehicle on I-35 just north of Pearsall for driving on the shoulder where prohibited. The driver was a 32-year-old man from Moore. He had a girl with him that he claimed was his girlfriend’s younger sister, but the trooper eventually found out that she was 15 and the suspect’s explanation for why they were together and what they were doing didn’t make any sense.

The trooper got consent to search the car and found film strips with the driver and 15-year-old girl. The man was arrested that night for furnishing alcohol to a minor because the girl had a detectable amount of alcohol on her breath and there was alcohol in the car.

Later troopers interviewed the girl at the sheriff’s office and found evidence on her phone which showed that the suspect had been trafficking the girl in the Frio/Medina County area. Sgt. Sanchez helped build the case with investigators and prosecutors from the 81st DA’s Office and the suspect eventually got 35 years for continuous sexual trafficking of a minor.

Sgt. Sanchez was honored by Governor Abbott and Senator Cornyn at that time and featured in a campaign ad for the National Center for Missing and Exploited Children (NCMEC). The NCMEC recognized Sanchez and two other officers for their dedication and for “taking the time to dig deeper” during a routine traffic stop, and were thereby able to rescue a child from sex trafficking.

“If we would stop just looking for things hidden in the car and start looking at the people sitting right in front of us, I think that we could help a lot more kids,” Sgt Sanchez said in the NCMEC interview.
This October, he will be giving a brief explanation of the DPS Interdiction for the Protection of Children Imitative, which is a reminder for troopers and law enforcement to look out for exploited children during a traffic stop.

Lt. Gov. Patrick Doubles Down on Sacrificing Seniors in Favor of 2020 Economy5 Tips for Thanking Your Heroes this Holiday Season