How Will Ex-Californians Affect the Election in Texas? 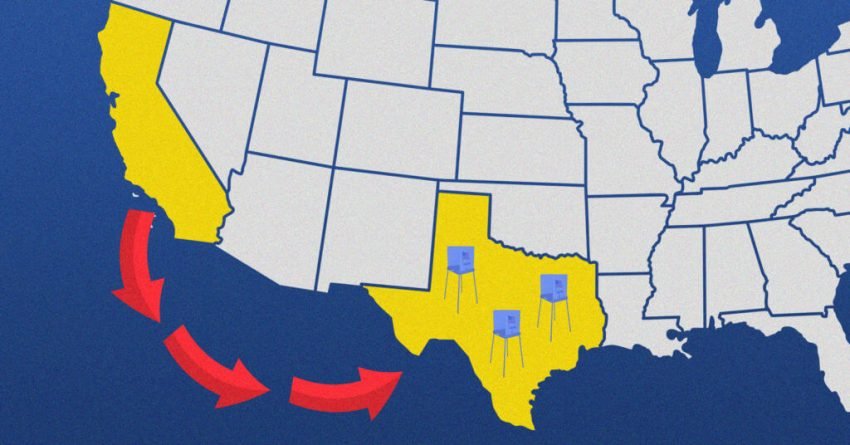 California hasn’t fallen into the Pacific, but housing costs and taxes there have plunged into an ocean of unaffordability, sending many of its residents to a higher ground of tax freedom and real-estate sanity.

A multitude of these Californians have sought cost-of-living refuge elsewhere. According to The Economist, nearly 250,000 Golden Staters made the sprint across the southwest and into Texas between 2006-2017.

With these expats now tucked neatly into Texas life, will their political ideology translate into votes that impact the outcome of the 2020 general election and local ones?

Carol Donovan thinks they will.

“Since 2008, more than 700,000 Californians have moved to Texas to escape the rising cost-of-living in California,” wrote Donovan, Dallas County Democratic chair, in an email. “Since most of these Californians are Democrats, their migration has helped Texas become more progressive.”

Donovan said the settling of these California expats into major urban areas or nearby suburbs has resulted in a surge in the number of Democratic voters in those areas, including Dallas County.

More than 560,000 people from around the nation migrated to Texas in 2018, according to the 2020 Texas Relocation Report published by Texas Realtors. Most of the newcomers moved to north Texas — Collin, Dallas, Denton and Tarrant counties — and Harris County. Nearly 90,000 of them were from California, an increase of 36.4% from 2017.

“The influx of Californians is a Texas trend that’s been observed for years — and one that’s even spawned political pushback by conservatives who fear these domestic migrants will bring with them a liberal ideology that would disturb the Texas way of living,” reported the Dallas Morning News.

But where these expats live and what political party they identify with are probably inconsequential when it comes to the 2020 vote, said Josh Blank, research director of the Texas Politics Project.

“Texas is an extremely large state that experiences a significant amount of migration both out of the state as well as in,” he said in an email.

In 2018, Texans leaving the state numbered 462,140. The Lone Star State ranked third in the country in this Texas Relocation Report category.

Blank isn’t convinced the California expat demographic can be transformative.

“To the extent that Californians could have an electoral impact, it’s more psychological than real,” he said. “We hear a lot about Californians coming to Texas with their liberal values, but both anecdote and the little data we have suggest that registered voters who move to Texas from California tend to be more Republicans and conservatives, on average.”

So not all transplants will be bubbling in Democrat candidates on the ballot, according to Paul Chabot, a California expat and founder of the Keep Texas Red Political Action Committee.

“Those moving here are voting Republican by a 60-to-40 split,” he wrote via email.

He said that Californians leaving the state due to excessive taxes, high fuel costs, inadequate schools, crime and homeless camps, “are smartly avoiding the Democrat-run cities like Austin, Houston, Texas, Dallas etc.,” opting for north Texas, the northern suburbs of Houston and the Hill Country. “Since 2007, California has lost a net million people. Those moving here are active in GOP efforts and will be a resounding measure to Keep Texas Red in 2022 and beyond.”

However, Blank said the reason the competition gap is closing between the two parties in Texas isn’t because of out-of-staters, but larger Democratic margins in urban centers where the most significant source of migration to these areas is coming from residents within the state moving to these locations, “not people coming from California and New York.”

While Donovan welcomes California Democrats to the fold, she pointed out that their presence is only a partial factor in Texas becoming a battleground state.

“Additional reasons include the rising Latino population, a significant increase in young Democratic voters, and the new majority of Democratic senior voters,” she said. “However, the primary reason is that the majority of voters, including former Republicans, believe that Donald Trump failed to protect Americans from the pandemic.”