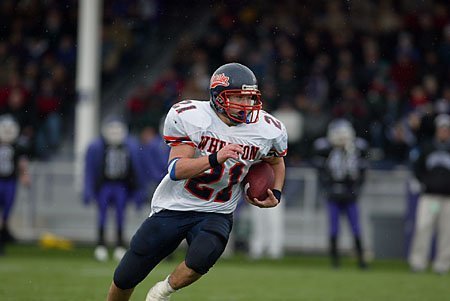 Garrett Granberg, a Blanco High School graduate, was one of eight inductees named to the Wheaton College athletics hall of honor for 2020. The announcement was made Thursday.

Granberg was an All-American selection at running back by D3football.com as a senior in 2004, helping lead the Thunder to a CCIW Championship in 2004. Wheaton won three-consecutive CCIW championships in 2002, 2003 and 2004, with four NCAA Division III Playoff appearances in that time. The Thunder posted a 32-5 overall record from 2002-04, including a 20-1 record in CCIW play with three CCIW Titles.

In Granberg’s senior season, he set a school single-season record with 1,371 rushing yards on 251 carries. He reached the end zone 13 times that year, and averaged 5.5 yards per carry and 114.2 rushing yards per game. He ran for a career-high 190 yards against Gustavus Adolphus on September 11, 2004.

In four seasons at Wheaton he ran for 2,963 career yards, a mark that was second in program history at the time of his graduation (and is third today). He scored 34 rushing touchdowns in his time at Wheaton, and his 204 career points was fourth on Wheaton’s all-time list at the time (the mark is now 10th).

Granberg scored four touchdowns in a dramatic 39-38 Wheaton victory at Augustana on November 13, 2004 as Wheaton secured a share of its third-consecutive CCIW Championship in the regular season finale. As a junior in 2003, he scored three times in a regular season victory against Hope and reached the end zone three more times in Wheaton’s First Round victory in the Division III Playoffs against the Flying Dutch.

Mike Swider, Granberg’s head coach, recalls of his running back, “I remember recruiting Garrett out of Blanco, Texas, a small town in the Hill Country halfway between San Antonio and Austin. Blanco still had the classic old town square and a bowling alley where the pins were set by hand the ball returned manually by someone trying to make a few extra dollars.

“Football was king and Garrett was their hometown hero. He came to Wheaton and I quickly nicknamed him ‘cowboy,’ not only because of where he came from but more so because of how tough he was. Garret was not the biggest, but he may have been the toughest. He was so hard to knock down and had great balance. In football as well as in life, success is more often a result of not how hard you hit, but more so about how hard you can get hit and keep moving forward. Garrett just kept coming and moving forward.”

Granberg reflects, “My experience at Wheaton College is marked by the intentional influence of coaches, teammates, and the culture of excellence built by Coach Swider. Serving and investing in community beyond my individual interests, and striving to fight against discouragement, even in the face of adversity, are life lessons that have continued to serve me beyond my football experience at Wheaton College. In critical moments, I still hear the voice of Coach Swider echoing wisdom and truth of investing in something that lasts, dying to yourself, and pursuing an authentic faith.

“I still hear Coach Walt Whitehead encouraging me to keep life simple and do the next right thing. I smile when I think about Coach J.R. Bishop and his never-ending “isms” that reveal his wisdom and real-life experience. Coach Tim Hardy taught me to passionately pursue excellence in all areas of my life. Fellow running back and teammate Mark Hamstra still impacts me today by challenging me to use the platform as an educator and coach to make a difference in our students’ and players’ lives. Overall, I am grateful for Wheaton College and Wheaton Football for developing my character and giving me the opportunity to play for a winning tradition, receive a top education, and grow in my Christian journey.”

Granberg expands on his memories of Wheaton, “The most meaningful moments and memories that shaped me as a person were not necessarily on the football field. Wheaton Football chapels spent on Friday evenings were life changing and marked me because of the authentic worship, senior share testimonies, and wisdom shared by alumni, coaches, and speakers.

“During this time, I grew in my own faith by watching and listening to my teammates and coaches live and speak out authentic faith and how the program developed them throughout their career. After a long week of practice, I looked forward to being renewed and reminded of what really matters. I also vividly remember the feeling of singing Swing Low Sweet Chariot with my teammates as we dismissed.”

Garrett lives in Lawrenceville, Georgia with his wife Amelia, and the couple has four children: Mary Mason, Ford (deceased), Caroline and Nealie. Garrett is a coach and teacher at Greater Atlanta Christian School in Norcross, Georgia.

Gov. Greg Abbott loosens COVID-19 restrictions for restaurants and other businessesBlind US voters sue over lack of accessible, mail-in ballots