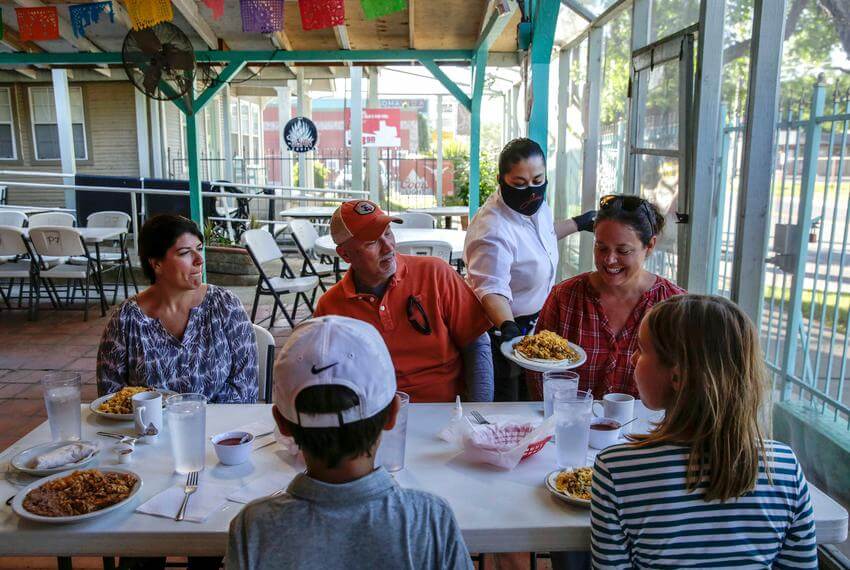 Gov. Greg Abbott is pushing state lawmakers to protect individuals and companies that opened businesses during the pandemic against coronavirus-related lawsuits, he said Tuesday. It’s another in a long line of Abbott’s attempts to support businesses despite the worsening public health crisis and ongoing economic turbulence in Texas.

While the governor did not provide specifics about what protections he wants businesses to have, he said his focus is on reducing lawsuits and creating more jobs. He told a table of business leaders Tuesday in San Antonio that businesses “have gone above and beyond” to remain open during the pandemic.

“And yet those same businesses, they face the threat of potential lawsuits for the fact that they opened up,” he said.

Many workers in Texas, however, have already registered coronavirus complaints with the federal government: Texans have filed at least 917 coronavirus-related complaints against employers with the Occupational Safety and Health Administration. Without providing a reason, OSHA has closed 820 of those cases as of Jan. 10.

“We can’t rely on Congress to do the job for us,” said George Christian, senior counsel with Texas Civil Justice League, which advocates for business protections and tort reform. “Even if something finally happens in Washington, this legislation is stronger and permanent, so that no Texan has to worry about a lawsuit unless they did something knowingly and with flagrant disregard for appropriate public health protocols.”

While Abbott has allowed businesses to stay open for in-person operations during the worst of the pandemic — intensive care units are completely full in more than 50 hospitals across the state — businesses, workers, and consumers have long said they have been confused by the governor’s patchwork of coronavirus-related rules. He has implemented, reversed, and tweaked several orders throughout the course of the pandemic that has simultaneously varied widely by county and region, depending on the pandemic’s grip on a particular area.

In the spring, the state was among the country’s first to reopen the in-person business in order to spur what Abbott and other state leaders hoped would be a strong economic recovery. But now, a year after the first known coronavirus case emerged in Texas, the state’s unemployment rate remains over 7% — worse than the national unemployment rate and near Great Recession levels — as the uneven and unequal economic recovery continues.

Texas’ unemployment rate in December was 7.2% — a decrease from the 8.1% November jobless rate, according to a Texas Workforce Commission report released on Jan. 22.

The Texas Civil Justice League has drafted a one-page framework outlining some of what lawmakers may tackle. Christian said state Sen. Kelly Hancock will champion the legislative effort in the upper chamber. Hancock, a North Richmond Hills Republican, chairs the Senate Business and Commerce Committee.

Christian said potential legislation is still being finalized. Neither the offices of Abbott or Hancock responded to requests for comment.

At the same meeting with business leaders Tuesday, Abbott also emphasized Texas’ need to improve statewide broadband internet access, which is currently under threat after a state fund that subsidizes rural network service is bleeding money and the state is cutting the amount of money it typically pays out to these service providers.

“Another thing that the pandemic has taught us is that broadband access is not a luxury,” Abbott said Tuesday. “It is an essential tool for businesses, for education, as well as for accessing health care. We must use this session to ensure that every ZIP code in the state of Texas has access to broadband access.”

Abbott did not specify the legislation to improve broadband access, but he said he generally wants Texas to “cut red tape.” Abbott has asked lawmakers to review every law he temporarily suspended during the pandemic, such as allowing the sale of alcohol to go.