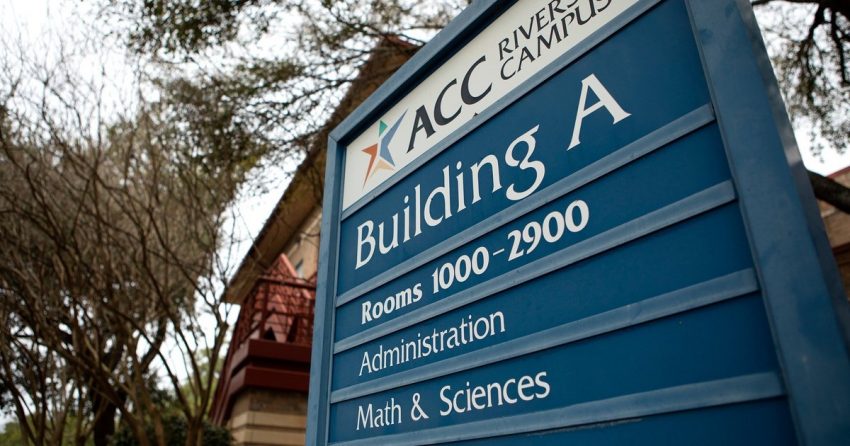 The number of students attending Texas’ community colleges dropped below enrollment in the state’s four-year universities for the first time since the 1990s as many two-year schools continue to grapple with sharp enrollment declines due to the COVID-19 pandemic, according to the Texas Higher Education Coordinating Board.

Community colleges have seen a nearly 11% drop during the pandemic, equivalent to a loss of about 80,000 students.

While two-year college student numbers fell below that of four-year schools by only about 2,000 students, higher education leaders in the state say it’s a meaningful change for the two-year sector, which has for decades promoted itself as the more accessible and affordable option for low-income Texans.

Overall, preliminary data released this week by the coordinating board shows college enrollment is down about 4% statewide since 2019, before the pandemic began.

At a board meeting this week, Higher Education Commissioner Harrison Keller told the board that many community colleges expected student numbers to increase during the pandemic, just as they traditionally do during economic recessions when unemployment increases and students search for cheaper alternatives.

Higher education leaders said they do not fully understand why two-year schools saw these massive declines. But Keller pointed to a drop in the number of high school students taking college courses for credit, known as “dual enrollment,” during the pandemic. Before the pandemic, dual credit had become a growing sector for many community colleges.

Keller also said funding has played a role for some smaller community colleges that don’t have the ability to offer a wider array of resources like child care or food pantries that have been shown to help students who are struggling to manage life responsibilities outside the classroom.

Texas community colleges are funded based on prior student numbers, and the Texas Legislature used enrollment figures during the pandemic to develop the budget for the next two years, resulting in budget cuts for 24 out of 50 community colleges.

According to the coordinating board, overall enrollment since 2019 has dropped by 5.5% among white students, 5% among Hispanic students and 4% among Black students.

In many cases, it is difficult to paint Texas higher education numbers with a broad brush. Much of the enrollment picture varies by region and by sector.

The drops and increases experienced by schools vary widely between two- and four-year schools. According to the coordinating board, two-year community and state colleges saw enrollment drops — one school as much as 28% — with only four two-year schools experiencing enrollment increases.

On the public university side, student enrollment fluctuations were just as varied. Texas Southern University has 16% fewer students than it did in 2019, while other universities saw increases. Texas A&M University at Galveston saw a whopping 32% increase. Overall, 24 of 37 public four-year institutions have seen more students enrolled.

While the two-year sector is struggling, Keller said some schools, like Lone Star College in the Houston area, remained stable and Texas State Technical College, a two-year school with campuses across the state, saw growth after initial drops in enrollment.

Also, some areas, including West Texas and the Gulf Coast, which includes Houston, saw enrollment increases this fall, while regions across the rest of the state saw enrollment remain flat or decline from last year.

The coordinating board expects to have final fall enrollment numbers by January.

Disclosure: Lone Star College has been a financial supporter of The Texas Tribune, a nonprofit, nonpartisan news organization that is funded in part by donations from members, foundations and corporate sponsors. Financial supporters play no role in the Tribune’s journalism. Find a complete list of them here.

Texas has new political maps. See which districts your home is in.U.S. Supreme Court will consider Texas’ near-total abortion ban on an expedited timeline. The law remains in effect for now.