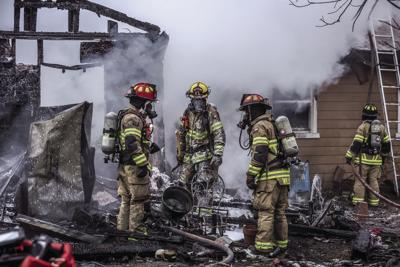 By Tammy Prout at the Hill Country Community Journal, Jan. 27, 2021

According to Kerrville Fire Marshal Jason Lackey, KFD received the call at 4:09 PM on Jan. 20 and the first units arrived six minutes later.

In all, Lackey said, three engine companies, one rescue truck, a medical unit and battalion chief were on scene and actively fighting fire for five hours. In addition, Lackey said, off-duty personnel were called in to assist firefighters.

“We gained control of the fire at 9:05 [PM]. We had crews remain on scene throughout the night,” Lackey said. “The fire marshal’s office relieved them at 7:30 [AM] and were able to clear the scene at noon on Thursday.”

The home is considered a total loss, Lackey said, citing extensive damage from the fire.

According to Lackey, several pets were inside the home, some of which were able to be safely retrieved by firefighters.

The Kerrville Firefighters Association and local American Red Cross have reached out to the two residents of the home to provide temporary assistance, Lackey said.