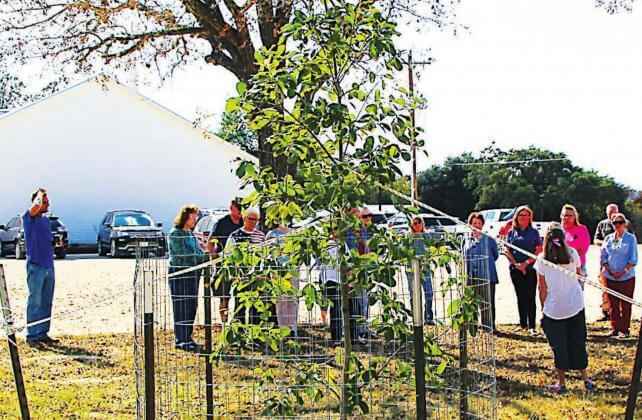 By Daniel Tucker at the Bandera Bulletin, November 18, 2020

Last Wednesday, the Rose Garden Club of Medina held a dedication ceremony at Medina Methodist Church for a Monterrey Oak tree that was planted in honor of Sir Norman Riggsby, a longtime Medina resident and D-Day veteran whose career included serving at the Nuremberg Trials escorting General George S. Patton through Paris.

The planting of the tree was to celebrate Texas State Arbor Day, which falls on the first Friday of November. This day was established in Texas because the cooler temperatures create more favorable conditions for successful tree planting.

Riggsby specifically requested that the tree planted was an oak because it was his favorite. He spent many years worshiping at Medina Methodist Church.

At the age of 16, Riggsby had just returned from completing his 20-mile paper route in his home of Taylor Township when he was sent out again to deliver news that Japan had bombed Pearl Harbor.

Drafted at the age of 17, he was sent to boot camp in Mississippi before shipping out in 1944 to Camp Gilmore, England. He would receive additional training all over the British Isles, Scotland, Ireland and Wales.

“We shipped out of Hamilton, England, for the invasion,” Riggsby said in an interview that was read at the ceremony.

“We had no idea what we were getting into,” said Riggsby, who came off the boat with his M-1 gun held over his head to avoid the water.

“The Battleship Texas was firing over our heads into those bunkers on the beach while we were waiting to disembark. Man, was it noisy!”

Riggsby spent most of D-day on the beach alongside the U.S. 4th division and Canadian and British troops. After being hit by shrapnel, he spent three days in an abandoned bunker that had been turned into an aide station.

After healing, Riggsby returned to battle, making his way to the Battle of St. Lo in France, where he was wounded and spent three weeks in a coma.

“They didn’t think I was going to make it,” said Riggsby. “I had almost been cut in two from a German Tiger tank shell and had a severe concussion. I was lucky. I survived.”

After leaving the hospital, Riggsby was made a special MP. He was assigned to round up Nazis before they could escape France. He also maintained the highways and rode the Autobahn on a Harley.

Riggsby served in the escort assigned to take General Patton through Paris on the way to Belgium for the Battle of the Bulge. He later was part of a policing force that maintained law and order while the U.S. military ran Berlin.

After the war, Riggsby returned briefly to Michigan before being transferred to California, where he worked with top-secret guided missiles and rockets at Navy Air Weapons Station in China Lake.

After attending the University of Houston on the GI Bill, Riggsby spent his career at Schlumberger Engineering working on experimental electronics. He married, had a family, and lived in Houston for 30 years.

After retiring at age 50, Riggsby and his family moved out to Medina, where he bought a corner of a big ranch and built a house, where the family spent many years.

For a brief time, Riggsby hosted an hour-long short wave radio program, during which he would call HAMs from all over the world.

In November 2018, the French Consul presented Norman Riggsby with the Legion of Honor, the country’s highest distinction.

Sir Norman now lives with family in Houston. He called into the event to express his gratitude and excitement to visit the location in person.

“Millions of people gave their lives so that we, the adults and children of today, could be free.”