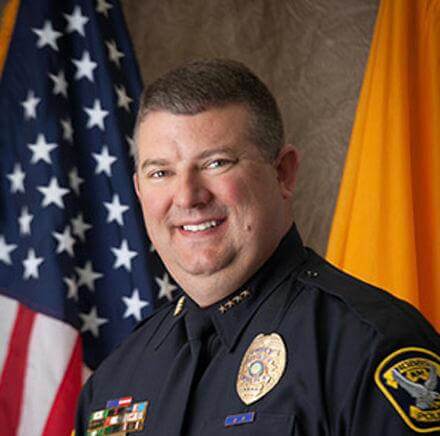 After an extensive search and interview process, the City of Kerrville is pleased to announce that Chris McCall has been named the city’s new police chief.

McCall brings with him more than 20 years of law enforcement experience in Hobbs, N.M. (population approximately 39,000), where he began his career as a patrol officer in 1999. He served as deputy chief of police from 2010-12 and interim police chief before his promotion to chief of police in 2013.

During his tenure as chief, McCall:

McCall holds a Bachelor’s Degree in Public Administration from Upper Iowa University and an Associate’s Degree in Mid-Management from Eastern New Mexico University. He is a graduate of the FBI National Academy 241st Session, the Harvard Kennedy School of Government State and Local Executive Program, the LEAD-Weldon Cooper Center for the Public Service University of Virginia, and the West Point Leadership Program. He has also served as president of the New Mexico Association of Chiefs of Police and the New Mexico Law Enforcement Professional Standards Council and has been a board member of the New Mexico Law Enforcement Academy Board, the New Mexico Municipal League, the Lea County Communication Authority, Crime Stoppers, the Hobbs Rotary Club, and the Lea County Drug Task Force Board.

McCall has a proven background in practical application of law enforcement processes and procedures, problem resolution, data analysis, and the training and development of personnel.

“We received over 50 applications from qualified applicants who want to be in Kerrville,” City Manager Mark McDaniel said. “I could not be more pleased with what Chief McCall will bring in terms of professionalism, knowledge, good character, and the ability to communicate.”

“I am extremely excited to join the team at the City of Kerrville,” McCall said. “I look forward to working alongside the professional men and women who make up the Kerrville Police Department in an effort to continue to provide professional service while working to have a positive impact on safety and the quality of life of the community.”