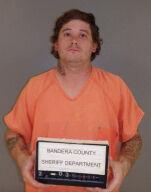 “We truly appreciate the support of the Kerrville Police Department and Kerr County Sheriff’s Office deputies,” BCSO Chief Deputy Matt King said. “They were eager to help and worked hard to find our suspect, who was ultimately taken into custody without incident.”

King said the suspect, Austin Ray Small, 25, of Bandera, is believed to have shot and killed 22-year-old Zachary Bower, also of Bandera, in a busy business area of Bandera over a domestic dispute.

“This occurred during a routine transfer of a child during a custodial matter,” King said. “The 4-year-old child had been with Mr. Small over the weekend. The mother of the child and Mr. Bower came to pickup the child from Mr. Small.”

King said Small became enraged upon seeing Bower with the woman and went to his vehicle and retrieved a gun and shot Bower following a physical encounter.

After the shooting, King said, Small fled the scene and was believed to be in Kerrville.

“BCSO reported that the suspect, Austin Ray Small, was involved in a shooting that resulted in a deceased victim,” Lamb said. “Small was reported to possibly be in possession of a 9mm hand gun.”

Lamb said BCSO deputies believed Small was in the Kerrville area and provided names and addresses of family members and associates of the suspect.

“KPD officers assisted BCSO in checking multiple locations where Small was suspected of being,” Lamb said. “At about 12:45 AM on Monday, Feb. 1, officers located the vehicle that Small was reported to be driving at a residence in the 300 block of Leslie Drive.”

Lamb said Small was located inside the residence and ordered outside, where he surrendered to KPD officers.

Small was turned over to the Texas Rangers and deputies from BCSO, was arrested and returned to Bandera County, where he remains in custody.