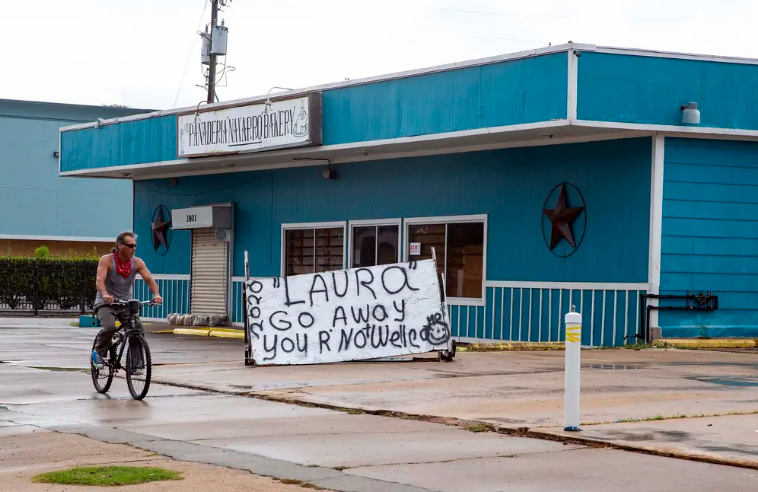 With Hurricane Laura approaching the southeast Texas coast during a pandemic, local and state officials are looking to house evacuees in government-paid hotel rooms instead of large, often clustered emergency shelters.

The state said they have been preparing for this since March, but still, there have already been issues as Texans leave cities and counties that have issued mandatory and voluntary evacuation orders.

The storm is expected to be a Category 4 hurricane whose dangerous winds will reach the Texas-Louisiana border Wednesday night, according to the National Weather Service. Storm surge, which pushes water from the coast inland, is also expected. The hurricane is expected to make landfall early Thursday morning.

One of the state’s few shelters announced for evacuees in Austin filled up Wednesday morning and ran out of hotel vouchers for Galveston evacuees, according to city officials. State emergency officials said they are working to ensure there is access to additional hotel rooms after the shelter at the city’s Circuit of the Americas racetrack filled up.

“Due to exceeded demand for safe sheltering options from Hurricane Laura, Austin Area shelters hit capacity around 5:30 a.m. this morning,” the city said in a press release. “Those seeking shelter from this weather event are welcome to wait at COTA to see when more hotel rooms become available. Once confirmed, shelter rooms will be on a first come first served.”

Early this morning, KVUE reported that evacuees were turned away from the shelter, which had the capacity for about 3,000 evacuees. At 10 a.m., the city said the racetrack was opened back up as a rest area and waiting location while officials scrambled to find more housing options.

At a noon press conference with the governor Wednesday, the chief of the Texas Department of Emergency Management said that the problem arose because the city believed it had rooms reserved, but they were taken by evacuees who went directly to hotels instead of first checking in with government officials at the racetrack. Officials are now juggling between those who come to the city for vouchers and those who check in to hotels on their own.

He said the city’s convention center is also being discussed as an emergency shelter option if needed, and there are still hotels available in surrounding counties like Williamson and Hays.

Gov. Greg Abbott still urged people who can safely evacuate to do so. He said more than 5,000 evacuees have already been sheltered throughout the state.

In response to the hurricane and the pandemic, San Antonio is only using hotel rooms for evacuees, Joe Arrington said. As of Wednesday morning, he said 1,458 evacuees were sent to local hotels.

“We’re not utilizing our typical large shelters, like a congregate-setting shelter. That will cut down drastically on potential COVID exposures,” he said.

Because of San Antonio’s usually popular tourism industry and a lack of travelers as the coronavirus continues to endanger the state, Arrington added that “we have lots of hotel rooms that are vacant right now.”

Seth Christensen said coastal regions have standing agreements in place with inland communities who take in evacuees and people rescued from the storms — like Galveston and Austin. The state provides buses to transport people to the partner cities and towns and are often then checked in and taken to an emergency shelter. But in the pandemic, Christensen said more places are choosing to house people in hotels or motels instead, where families can be better isolated.

“Using non-congregate settings like hotels is a new environment in 2020,” he said. “You don’t have a lot of people traveling at the moment because of COVID-19, so that probably works in our favor.”

He said the city’s costs for the hotels, like emergency shelters, are reimbursable with disaster funds from the federal government. In places where emergency shelters are established, they will follow guidelines from the state health department and the U.S. Centers for Disease Control and Prevention, providing cleaning supplies and masks to those who need them and holding fewer people with more distance between them.

The state has also increased its contracted number of buses, Christensen said, since a bus that in previous years could have transported 50 people may now only seat 15 or 20. Masks are also required on buses and are provided to those who don’t have one. Abbott said Wednesday the state had already deployed 400 buses.

The state has also been stockpiling personal protective equipment (PPE) throughout the pandemic, Christensen said, with masks, gloves and cleaning supplies spread out throughout the state where they are expected to be needed most.

“For this event, we’re able to utilize that PPE not only for the first responders that are going to need it if they are rescuing residents, evacuating residents, but also the residents,” he said.

Texas Parents Opting for At-Home Learning Over the ClassroomHurricane Laura in Texas: Evacuation orders lifted in some parts of Texas, Abbott to survey damage