A week before the election, Texas National Guard prepares to deploy troops to cities 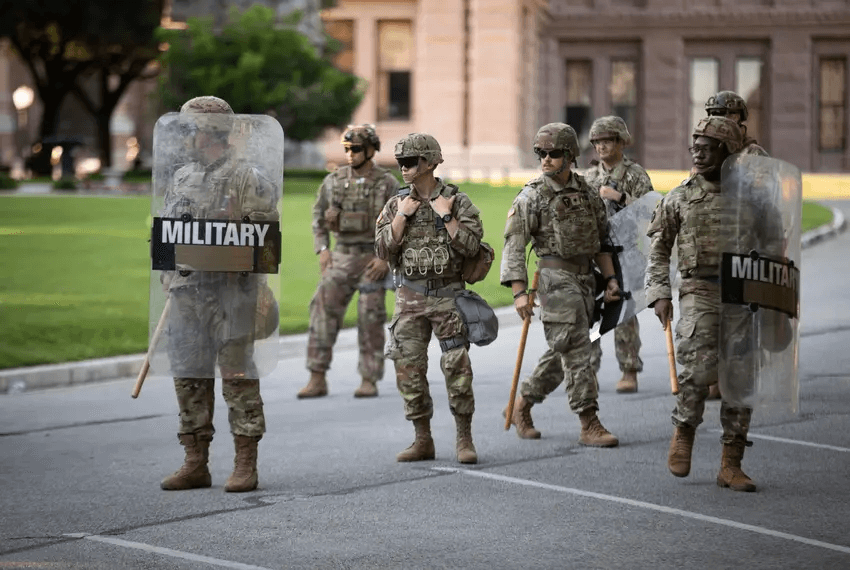 across Texas ahead of the Nov. 3 election.

Brandon Jones, a spokesperson for the Guard, said the deployment is not related to the election and troops would not be stationed at polling places. He said it was a continuation of peacekeeping efforts that began during anti-police brutality protests this summer.

Troops could be sent to five major cities: Houston, Dallas, Fort Worth, Austin, and San Antonio, according to the San Antonio Express-News, which first reported the move. The newspaper reported that Guard members could arrive as soon as this weekend.

Gov. Greg Abbott previously activated the National Guard in late May following a series of demonstrations that erupted across Texas in response to the killing of George Floyd by Minneapolis police.

During a burial service for Floyd this summer near Houston, police asked other agencies for assistance in what they thought might be a massive gathering with protesters and counter-protesters. U.S. Customs and Border Protection planned a massive presence, including 66 paramilitary agents from CBP’s Border Patrol Tactical Unit.

Abbott’s office did not respond to multiple requests for comment.

Houston Mayor Sylvester Turner has not been contacted by either Abbott or the Guard about the deployment, spokesperson Mary Benton told The Texas Tribune on Tuesday.

In Dallas, Mayor Eric Johnson also was not aware of the potential deployment to his city, according to spokesperson Tristan Hallman.

Law enforcement agencies across the state have been preparing for protests or other unrest on election night. Police departments in Austin, El Paso, San Antonio and Fort Worth previously said officers were planning for demonstrations.

Separately, the FBI’s field office in Dallas warned that far-right extremists could pose a violent threat in North Texas around the election.

And federal agents within the U.S. Department of Homeland Security’s Immigration and Customs Enforcement have been put on standby in the runup to the election, CNN reported on Monday. Customs and Border Protection has been regularly training personnel for unrest.