A return to football and relief for Baylor and Texas 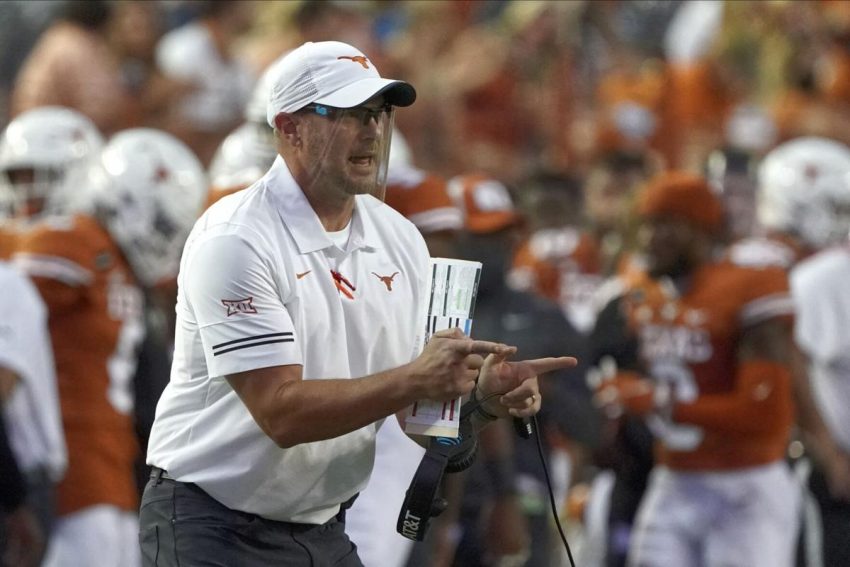 AUSTIN — Texas’ Tom Herman and Baylor’s Dave Aranda are old friends and college teammates who will meet for the first time Saturday as opposing head coaches.

For both, just getting on the field will be somewhat of a relief. As for Herman, all eyes will be on how the Longhorns (2-2, 1-2 Big 12) leave the field as well.

At Baylor, Aranda’s first season with the Bears (1-1, 1-1) has seen his locker room swept up in coronavirus problems that forced the program to shut down for 10 days and postpone last week’s game against Oklahoma State. It was the second time this season Baylor had a game interrupted by the virus: the Sept. 19 matchup against Houston was called off the day before the game.

Baylor hasn’t played since an overtime loss to West Virginia on Oct. 3. The long break pushed the players out of the football facilities and into online meetings.

“It was great to be back (this week),” Aranda said. “There’s some real excitement there.”

The game will remain in semi-limbo until Baylor’s final COVID-19 test results Friday.

Herman’s problems are two-fold. His fourth season in Austin is mired in a two-game losing skid and many fans are just as angry about what’s happening at the end of games: Most players are skipping the traditional post-game singing of “The Eyes of Texas” school song with fans.

The controversy flared this summer when some players wanted the school to drop the song because of its links to racist elements in the school’s history.

Defensive lineman and team co-captain Ta’Quon Graham said the disruption of the postgame tradition hasn’t divided the locker room but all the attention on the issue has created a distraction for the players. Graham said this week he’ll stay on the field for the song.

Herman and Aranda were teammates at Cal-Lutheran 25 years ago. Aranda was a linebacker, Herman a wide receiver. They’ve crossed sideline paths a few times, most recently when Aranda was the defensive coordinator at LSU last season and beat Texas.

“I think it’s really cool that 20% of the head coaches in the Big 12 are Cal Lu graduates,” Herman said.

Texas’ Sam Ehlinger and Baylor’s Charlie Brewer are old high school rivals from the Austin area. Ehlinger has carried Texas with 16 touchdown passes along with five more rushing TDs. He also leads the team in rushing. Brewer could snag a career highlight with a senior win in his hometown.

“We’ve been playing against each other, I guess, probably since Pop Warner,” Brewer said. Ï think we’re both ready to go compete this weekend.”

Baylor linebacker Terrel Barnard anchors the defense and has double duty: pressure Ehlinger when he can, and also spy on the QB when in coverage to prevent him from running. Barnard already has 2.5 sacks and an interception in two games.

Baylor’s Tresten Ebner had two kickoff return touchdowns in a win over Kansas. Longhorns special teams have been a disaster with blocked punts, fumbled punts, a blocked field goal and penalties that wiped out big kick returns.

Junior tailback Keaontay Ingram has been a mixed bag for the Longhorns. His fumble at the goal line cost Texas a win over TCU but his game-tying touchdown catch against Oklahoma sent the game into overtime. That TD came on a nearly identical play to one he dropped against LSU in 2019.

Texas has been a fourth-quarter team offensively. The Longhorns rallied from 15 points down in the final 4 minutes to beat Texas Tech, rallied to take a fourth-quarter lead before losing to TCU and stormed back late against Oklahoma to force overtime.