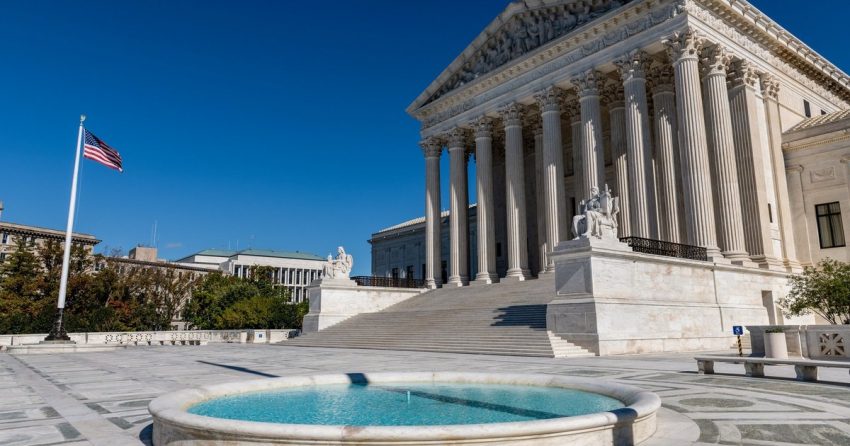 The U.S. Supreme Court is set to hear arguments Tuesday on the religious rights of those condemned to die in Texas.

The justices, who have taken a keen interest in the subject over the last few years, aren’t focused on religious objections to the state executing people after juries and courts deem them deserving of death. Rather, they will examine what rights the condemned have to religious comfort as they are being killed.

At the center of the case is John Ramirez, a 37-year-old sentenced to die for robbing and fatally stabbing a store clerk in 2004. This summer, with an execution date set, Ramirez asked if his pastor could lay hands on him and pray over him as he died. Texas prison officials denied the request.

“[Ramirez] does not challenge his conviction, his death sentence, or the State’s chosen method of execution,” the prisoner’s briefing to the high court began. “Instead … [he] asks the State to allow his chosen spiritual advisor, Pastor Dana Moore, to perform ministrations in the execution chamber that include laying hands on [Ramirez] and audibly praying over and with [him] during the final moments of [his] life.”

In an email included in the court record, the prison’s general counsel told Ramirez’s attorney that, for security reasons, spiritual advisers can stand in the corner of the death chamber, but not speak or touch the inmate.

Those restrictions are “nonsensical,” Seth Kretzer, Ramirez’s lead attorney, argued in a brief to the high court.

“It disrespects religious practices that have long histories not only in many faiths, but also in the State’s own execution chamber, where spiritual advisors in the past have been permitted to lay on hands and audibly pray during executions,” Kretzer wrote.

The battle over religious rights during executions has repeatedly caught the high court’s attention in recent years. Ramirez’s was the third Texas execution halted in three years by the Supreme Court over challenges to rules on how, if at all, religious advisers are allowed to attend to condemned prisoners as they die.

(In the same time frame, the court has rejected final appeals for 12 other men executed in Texas. They had asked the court to stop their deaths for reasons including their youth at the time of murder and claims of false testimony or junk science presented at their trials.)

Until recently, chaplains employed by the Texas Department of Criminal Justice were allowed in the room during executions, praying and resting a hand on the prisoner’s leg. But the agency only had Christian and Muslim advisers on staff.

In 2019, a Buddhist prisoner was told his adviser — who was not a prison employee — could not stand by as he was injected with a lethal dose of pentobarbital. He protested, filing a lawsuit arguing that the restriction constituted religious discrimination. The U.S. Supreme Court agreed, halting the March 2019 execution and setting into motion a yearslong back and forth over Texas’ execution protocols.

Justice Brett Kavanaugh, a practicing Catholic who was then new to the bench, wrote along with the order stopping the execution that the state could either allow prisoners of all faiths to have religious advisers in the chamber or allow none, but it couldn’t have different practices for different religions.

Days later, TDCJ opted for the latter, banning chaplains of any religion inside the death chamber, including its own staff. Spiritual advisers could instead stand in the small adjacent rooms where friends and family of the murder victims and prisoners, as well as media, gather.

In June 2020, the nation’s high court stopped another Texas execution after a prisoner argued the new policy still didn’t pass muster. The condemned man said it violated his religious freedoms, and in a brief order the justices asked lower courts to determine “whether serious security problems would result if a prisoner facing execution is permitted to choose the spiritual adviser the prisoner wishes to have in his immediate presence during the execution.”

This April, TDCJ again revised its execution policy. It allows those on death row to have their personal religious advisers in the room as they are executed, provided the advisers first are verified, pass a background check and complete a state orientation. But, as was made clear to Ramirez, spiritual advisers from outside the agency are not allowed to touch the prisoners or speak as they die.

The justices’ specific focus on how to execute someone in a way that doesn’t violate religious rights, without addressing the death penalty more generally, may seem ironic, according to Francis Beckwith, a professor of philosophy and church-state studies at Baylor University. But he said the court’s role is to evaluate if Texas’ policies violate a federal law that aims to protect religious freedoms of prisoners. The constitutionality of the death penalty itself, he said, is a separate issue.

“If there was no federal statute, then the court wouldn’t have to raise the questions,” Beckwith said. “The justices, they have to deal with the law, which sometimes may not be congenial with what we want politically.”

For Roger Olson, a Baylor theology professor who is against the death penalty for both secular and religious reasons, the least the state can do is allow someone to die in line with their beliefs.

“If they’re going to continue to do this barbaric thing, then I think they need to accommodate to the religious sensibilities of prisoners as much as is possible,” Olson said.

Ramirez was sentenced to die in 2008 for the murder and robbery of Pablo Castro, a convenience store clerk in Corpus Christi. Court records state Ramirez stabbed Castro 29 times during a 2004 robbery spree with two women seeking money to buy drugs. Castro had $1.25 on him. Ramirez fled to Mexico and stayed there for three years before he was arrested.

He was scheduled for execution for the third time in September when the high court stopped the execution in a last-minute ruling and asked attorneys to appear in their court to argue whether TDCJ’s limitations “substantially burden the exercise of [Ramirez’s] religion.” The justices also will weigh if Ramirez properly followed the internal complaint process before moving to the courts.

The prison system argues that allowing outside advisers, instead of staff, requires more caution. What staff chaplains could do under old policies “disregards the heightened risks that come with allowing an outsider into the chamber,” Texas Solicitor General Judd Stone wrote.

Attorneys for nine other death penalty states agreed. Arizona, Alabama, Arkansas, Idaho, Indiana, Louisiana, Montana, South Dakota and Utah argued in a brief supporting Texas that “the safety and security of state execution protocols should not be subject to federal court micromanagement.”

More than a dozen groups wrote to the court in support of Ramirez, including advocates for religious freedoms, faith leaders and former prison employees. They argued that, having allowed touch and prayer for decades, TDCJ could have security escorts of religious advisers instead of banning any touch or speech. Spiritual advisers who have been in death chambers argued that their duty is more active than what TDCJ allows.

“Their role in the execution chamber is not simply to stand by mutely, but to minister to the prisoner as he meets death, providing spiritual comfort and a final opportunity for the individual to engage with his faith at the most critical time,” stated a briefing submitted by six advisers and four former prison officers who had been to executions.

Texas has also argued Ramirez didn’t follow the proper procedure prisoners must follow to complain about prison conditions before going to the courts — an argument Ramirez and prison grievance experts denied, pointing to his internal complaints.

Moreover, the state says, Ramirez’s request is simply a tactic meant to delay his imminent death. The argument is one that several of Castro’s nine surviving children feel deeply. Fernando Castro, who was 11 in 2004 when his father was killed, said in a court briefing filed with three of his siblings that he has twice flown from Florida to Texas to watch Ramirez die, only to be wounded again by delays.

“I have waited far too long for this chapter of my life to close,” he wrote to the Texas Board of Pardons and Paroles in August. “I want my father to finally have his justice as well as the peace to finally move on with my life and let this nightmare be over.”

Ramirez’s attorney and the Texas solicitor general will each have 25 minutes to argue before the court Tuesday morning, with 15 minutes granted to the U.S. Department of Justice, as well. The DOJ, which said it supported neither side but said Texas’ policy was overburdensome, argued the case is relevant to the agency because it could affect federal death row inmates as well.

Disclosure: Baylor University has been a financial supporter of The Texas Tribune, a nonprofit, nonpartisan news organization that is funded in part by donations from members, foundations and corporate sponsors. Financial supporters play no role in the Tribune’s journalism. Find a complete list of them here.