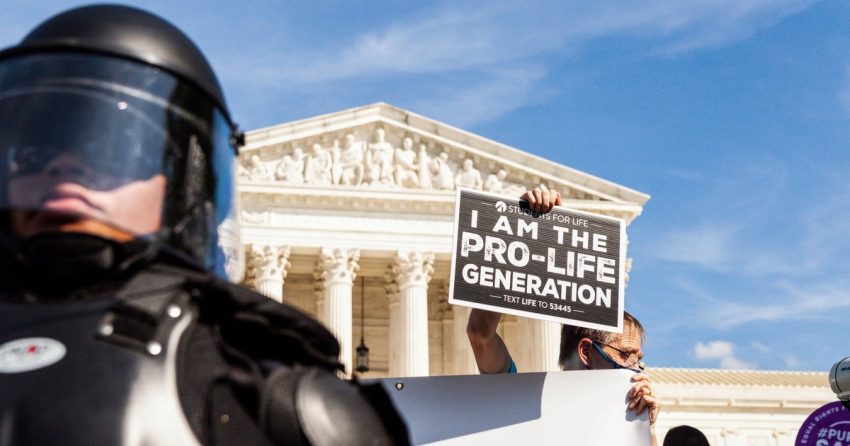 Texas urged the U.S. Supreme Court on Thursday to keep the state’s near-total abortion ban in place, arguing that the Biden administration’s attempt to block the law should be rejected and that the federal government lacks standing to sue over the matter.

The state made that argument in response to the Biden administration’s request on Monday for the Supreme Court to step in after the 5th U.S. Circuit Court of Appeals paused proceedings in the district court that was overseeing the case.

Until now, legal proceedings over Texas’ new law have progressed without touching the constitutional precedents over a person’s right to abortion. But in Thursday’s filing, Attorney General Ken Paxton wrote that the Supreme Court could also treat the state’s response as a challenge to two cases that helped establish that right — Roe v. Wade and Planned Parenthood v. Casey — if the high court grants a request to U.S. attorneys asking that the court leapfrogs over the appellate court currently overseeing the case.

The district court had temporarily blocked enforcement of the law for two days before the 5th Circuit froze the order. Now, federal attorneys are asking that the Supreme Court resume district court proceedings and allow the abortion restrictions to be blocked once again. The Supreme Court could put the case on its docket as soon as this week, or it could decide not to take it up.

Paxton argued in Thursday’s filing that the federal government lacks standing — meaning that it can’t demonstrate that it is harmed by the law — and that therefore the Supreme Court should decline the U.S. Justice Department’s emergency request to temporarily block the law while court proceedings to determine its constitutionality continue.

“The United States’ lawsuit against Texas is extraordinary in its breadth and consequence, having an impact on precedents that have existed far longer than any right to abortion has been recognized,” state attorneys wrote. “Texas executive officials do not enforce SB 8, and Texas’s judicial branch is not adverse to litigants who appear before it and who believe SB 8 is unconstitutional.”

The Supreme Court is also considering whether to fast-track a separate lawsuit by abortion providers in the state. The providers asked the court on Sept. 23 to take up the issue without waiting for the 5th Circuit to make a ruling on the case.

The request, called a “certiorari before judgment,” is a rarely used procedure where the high court would immediately review the decision of a district court without an appeal having been decided by a federal appellate court. Normally, the Supreme Court would get involved only if asked to step in after an appeals court reaches a decision. The 5th Circuit is set to hear oral arguments in that case no earlier than December.

The Supreme Court has a 6-3 conservative majority. And the high court already allowed the law to go into effect; in a one-page order on Sept. 1 — the day the law went into effect — the justices declined to block the law but did not rule on its constitutionality, citing procedural difficulties. Many are doubtful the Supreme Court would overturn the law now, given the anti-abortion stances previously expressed by the conservative justices.

Now that the state filed a response, the Supreme Court will decide whether to take up the case. Under court rules, the certiorari before judgment method can be used “only upon a showing that the case is of such imperative public importance as to justify deviation from normal appellate practice and to require immediate determination in this Court.”

Texas’ abortion law was written in a way that makes it extraordinarily difficult to overturn in court. Typically, those who’d like to challenge a state law have to sue the officials responsible for enforcing it to block them from punishing violators.

But the law forbids state officials from enforcing it. Instead, it empowers private citizens to sue those who “aid and abet” anyone getting abortions not allowed under the statute.

The law bans abortions as early as six weeks into pregnancy, but allows anyone in the U.S. to file a lawsuit against someone who aids a person getting an abortion. If they win, they are entitled to at least $10,000, plus their legal fees, from the party they sued. On the flip side, anyone sued cannot recover their legal fees, even if they win the case or it is thrown out.

The fear of potential lawsuits that could cause insurmountable financial burden was enough to convince major Texas abortion clinics to cancel appointments and come into compliance with the law by the time it came into effect. Experts estimate the law makes more than 85% of the abortions that previously occurred in the state illegal.

The two lawsuits being considered by the Supreme Court join many legal efforts aimed at overturning Texas’ abortion restrictions.

Disclosure: Planned Parenthood has been a financial supporter of The Texas Tribune, a nonprofit, nonpartisan news organization that is funded in part by donations from members, foundations and corporate sponsors. Financial supporters play no role in the Tribune’s journalism. Find a complete list of them here.