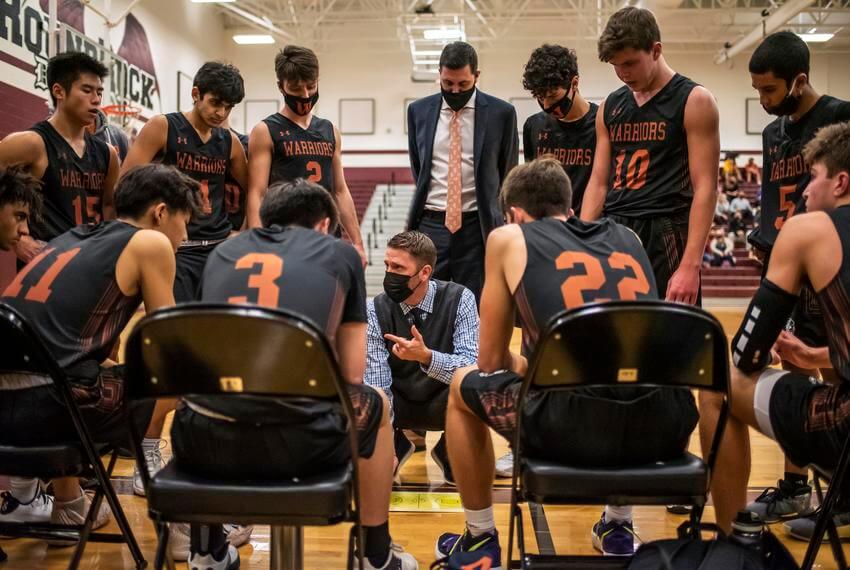 Eric Kipper has played basketball for as long as he remembers. As a small child, he routinely shot hoops with his dad in the driveway. He joined a team in second grade, and playing became part of his daily routine.

“I love playing and being with my team,” said 18-year-old Kipper, who plays for Westwood High School in the Round Rock Independent School District. “It’s been a large part of my life.”

When the coronavirus hit, shutting down schools and sports in the spring, Kipper couldn’t imagine not playing his senior year.

The pandemic has prompted some states to delay or cancel indoor sports, but Texas has moved forward with them. Volleyball just wrapped up its season and basketball is underway. Wrestling, one of the closest contact sports, is slated to begin in February.

As COVID-19 cases have resurged across the state and country, some medical experts concerned about increased risks of virus transmission related to indoor sports are advising students not to participate in them.

School districts should “not do it until we can get the pandemic under better control,” said Dr. Tina Tan, professor of pediatrics at the Northwestern University Feinberg School of Medicine, where she also serves as a pediatric infectious diseases attending physician. Players aren’t wearing masks but are breathing heavily and are able to produce smaller droplets that stay in the air longer, Tan said, increasing the risk of transmitting the virus to others. Despite the arrival of the COVID-19 vaccine, it will be months before it’s widely available to everyone in the public.

“Everybody is rushing to do this and they’re not thinking about the consequences of doing it,” she said. “Right now COVID is surging everywhere in the country. You’re going to have to wait until the rates get lower and enough people are vaccinated that the amount of transmission is happening is less … These particular activities are increased risk factors for individuals spreading COVID.”

Earlier this month, the American Academy of Pediatrics put out new guidelines recommending students participating in indoor sports wear face masks. The organization said school administrators must consider the mounting evidence regarding COVID-19 in children and adolescents, including the role they may play in transmitting the infection.

As of Dec. 24, more than 2 million children in the United States had tested positive with COVID-19 since the onset of the pandemic, with 1 million of those cases since mid-November. The total number of children who contracted the virus represents 12.4% of all cases, according to data from the American Academy of Pediatrics and the Children’s Hospital Association.

While the death rate among children remains less than 1%, an increasing number of children are requiring hospitalization, Tan said.

The number of Texas students who have been confirmed positive for COVID-19 has steadily risen since schools reopened their doors to in-person learning. Weekly state data ending Dec. 20 showed 4,406 new confirmed COVID-19 cases among students in Texas schools, bringing the cumulative number of student infections to 62,675, 2% of the nearly 2.9 million students who are learning in-person or participating in extracurricular activities on campus.

Austin Public Health Interim Medical Director and Health Authority Dr. Mark Escott in public updates in December said cases related to schools continue to be tied to extracurricular activities and social events outside of school. In previous months, more than once, he pointed to football and related strength and conditioning to prepare for the sport as the culprit for COVID-19 cases at Austin-area schools.

Last week, he recommended Austin-area middle and high schools be taught virtually only for two weeks after the winter break to prevent the spread of the virus as cases surge. He also called on school districts to suspend or postpone extracurricular activities, particularly those for which masks cannot be worn and distance cannot be maintained.

“With the positivity data we’re seeing, and the impact on hospitalization admissions and our ICUs, it’s time to scale back the risk,” Escott said last week.

“By and large, that is where we are seeing disease spread,” he said. But advocates say districts and families must weigh the increasing number of students nationwide who are fighting mental health issues associated with the pandemic and said students should continue to play. Students have reported increased feelings of anxiety and depression, and mental-health emergency room visits, as well as thoughts of suicide and suicide attempts, are on the rise.

Students have been isolated from their friends, school environments and teachers, who serve as support systems, contributing to feelings of hopelessness, Dr. Kia Carter, the Cook Children’s Medical Center’s co-medical director of psychiatry, told the Texas Senate Committee on Health and Human Services earlier this month.

“In child psychiatry, we promote coping skills, we promote healthy ways to cope with stressors and difficulties. And a lot of that is kids participating in sports, their activities, whatever that be, and that’s all been stripped away from them,” Carter told the committee.

Krista Stubbs’ older daughter, a ninth grader, plays volleyball and basketball for a private school in El Paso, a virus hot spot in the nation. She said she wanted her children back in school and playing sports because they needed “to get back to something normal.” While schools were closed, her daughter did poorly with online school and her grades began to drop.

“I tried my hardest to stay as active as we could because she started withdrawing,” Stubbs said. “I feel the risk of them staying at home, not being active, not working out or working their brains or being around friends, outweighs the risk of them getting COVID to me.”

Other states have pushed off winter sports, with no hard timeline on when they can begin. In Colorado, the state’s high school sports and activities association earlier this month was pushing back winter high school sports, including basketball, wrestling and hockey, by at least one month.

But state and school officials in Texas say they’ve taken steps to mitigate the risks of transmission. Students wear masks while on the bench or not actively playing and many are not riding on buses to the games. Players put on hand sanitizer each time they step off court and the playing ball is sanitized and swapped out multiple times during a game.

Schools also limit and spread out spectators, or don’t allow them in games at all. And student athletes have forgone the tradition of shaking hands with opposing team players at the conclusion of the game.

Guidelines by Texas’ University Interscholastic League (UIL), which oversees school extracurricular academic and athletic contests, requires masks for spectators and for students who are not actively participating in competition or at practice. It’s up to local districts, however, to determine whether students must wear them while playing.

“The masking exception that we (have), we have school districts around the state that conveniently enough, it happens that the entire student athlete population has a medical illness that prevents them from wearing a mask when they’re participating in activities,” Escott said in mid-December. “I hear from parents of our local basketball players who are upset because their school district, their basketball team, requires that masks be worn during basketball games yet the opposing team has no masks because we don’t have the ability to enforce that.”

In late October, the Texas Education Agency and the Texas Division of Emergency Management rolled out free COVID-19 rapid testing for students and teachers. The program aims to curb the spread of the virus in schools. More than half of the state’s 1,200 school districts have opted into the program, with nearly 1.4 million tests distributed to those districts.

“Working closely with districts across the state, we are doing all we can to help Texas students have the school experiences they need and deserve,” Education Commissioner Mike Morath said in a statement. “As campus-level data provided to the state has consistently reflected, our schools are not a source of viral spread.”

Jamey Harrison, the UIL’s deputy executive director, said participation in sports and other extracurricular activities is a valuable experience particularly “in a year that students are facing challenges and mental health challenges that they’ve never faced before.”

Westwood High School basketball coach Brad Hastings said many of his students have trained most of their lives, and it’d be a shame if the seniors didn’t have the opportunity to play. He started the year with the period for the basketball class meeting online.

“I could see the kids being disengaged from it, missing the things they love,” he said. “It’s been a bright spot for the athletes in our program. It’s been a blessing for them to continue to play.”

A handful of students decided not to play this year, but Kipper said after seeing the protocols the team is taking this year, he feels the school has done “a great job in reducing the risk that there is to make it as safe as we can.” He said online school is stressful and being isolated has been tough. Basketball has served as an outlet for him to destress. Without it, he said, he believes his grades would suffer.

“We all have the goal in mind to stay as safe as possible,” Kipper said, noting the team is learning remotely only, not seeing other friends and avoiding large gatherings. “Just like when we play basketball on the court, it’s a team effort off the court, too, to stay safe.”