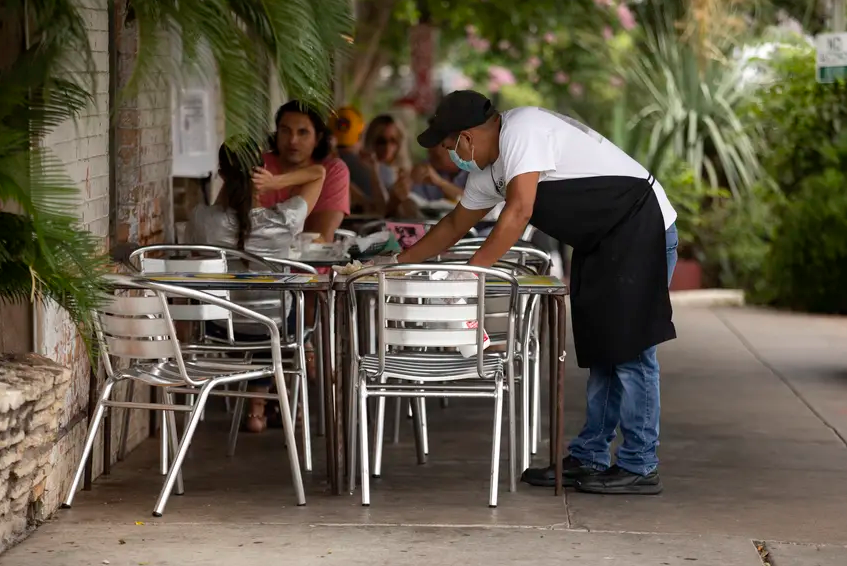 Texas collected $2.98 billion in sales tax revenue in July — 4.3% more than in July 2019. That revenue, which mainly reflects purchases made in June, was “better than expected, despite the high unemployment due to the pandemic,” Hegar said in a statement.

“The increase was due to a surge in collections from the retail trade sector,” he said, noting that collections from e-commerce “were up sharply” as consumers shopped online. More online marketplace and remote retailers, Hegar said, were required to collect and remit Texas taxes on their sales thanks to a 2018 U.S. Supreme Court decision allowing states to collect sales tax from online retailers that don’t have a physical presence inside their boundaries and two Texas laws that went into effect in October.

Meanwhile, he said, receipts from other major sectors in the state, such as construction, services and restaurants, “showed significant declines.”

Monday’s news follows months of fallout related to the pandemic, which began spreading across Texas in March. After the governor ordered much of the state to shut down in an attempt to curb the spread of the virus, Hegar announced in May that the state had seen its steepest decline in over a decade with April sales tax collections. The next month, Hegar said the bleak trend had continued. As collections dropped, the state’s unemployment rate skyrocketed — a record-high 13.5% rate was reported in April.

But Hegar warned that the positive news from July collections could turn dour again in the coming months after certain federal unemployment benefits related to the pandemic expired at the end of July.

“With about 1.3 million Texans with continued claims for insured unemployment and another 184,000 receiving benefits under the Pandemic Unemployment Assistance program in June, it’s likely that consumer spending was significantly supported by enhanced benefits provided by the federal CARES Act and related legislation enacted in response to the COVID-19 pandemic.”

Sales tax revenue is the state’s single largest source of funding and influences the state budget-writing process at the Legislature. And, for the past several months, that revenue has been on the decline compared to the same month in 2019. The state’s total revenue for May, June and July this year, Hegar said Monday, was down 5.3% compared to the same period last year.

The Legislature will all but certainly face an uphill climb with the budget process when state lawmakers reconvene for a regular session in January. Hegar revised his revenue estimate last month projecting general revenue available for the state’s current two-year budget would be roughly $11.5 billion less than originally estimated. Hegar also said the state was on track to end the biennium, which runs through August 2021, with a deficit of nearly $4.6 billion.

State leaders have already moved to try to offset some losses from the economic fallout. In May, Gov. Greg Abbott, Lt. Gov. Dan Patrick and House Speaker Dennis Bonnen directed certain state agencies and higher education institutions to identify a 5% budget cut for the current biennium. Hegar’s latest estimate, he said, did not include those savings, which will reduce the projected shortfall.