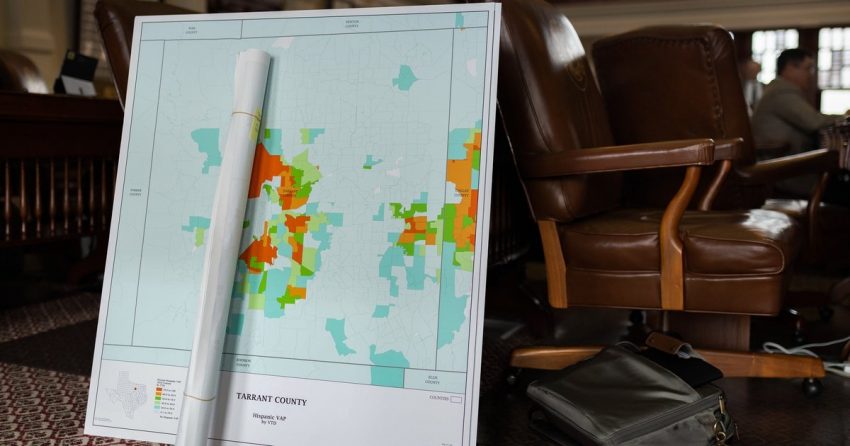 Opening a second front in widening legal wars over redistricting, a coalition of mostly Hispanic, Democratic members of the Texas House filed suit in state court Wednesday challenging the constitutionality of the new political map for the state House.

Multiple lawsuits challenging new political districts drawn by the Republican-controlled legislature will play out in federal court, but the Mexican American Legislative Caucus filed the state case citing language in the Texas Constitution requiring legislators drawing the Texas House’s 150 districts to keep intact counties with sufficient population to make up one House district.

MALC’s challenge centers on the reconfiguration of Cameron County in the Rio Grande Valley, which breaks the county line twice to create three districts — only one wholly contained within the county. The state’s “county line rule,” MALC argues, would require two districts be drawn within Cameron, with the remaining population connected to a single neighboring district, as was the case under the map the state used for the last decade.

Texas redistricting fights have typically played out in federal courts, which decade after decade have found that lawmakers, often intentionally, flouted federal protections for voters of color, and two federal lawsuits had already been filed against the new maps. The caucus simultaneously filed a federal lawsuit Wednesday, alleging the state’s new maps were drawn with discriminatory intent and violate the federal Voting Rights Act. Filed in Austin, MALC framed the suit as an effort to “redress once again Texas’s sordid pattern of racial discrimination.”

The new lines in Cameron, drawn over the objections of lawmakers who represent the affected areas, would afford Republicans a newly competitive state House seat in an area currently dominated by Democrats. In its federal lawsuit, MALC alleges the lines would also “severely dilute” the ability of Latinos and the Spanish-speaking community in the area to elect their preferred candidates.

The MALC lawsuits are just the latest entries in the growing stack of legal challenges to the new maps for the statehouse, Congress and the State Board of Education.

The Republican-controlled Legislature this year took on the work of redistricting to include a decade of population growth into the state’s maps and equalize the population of districts. The final product was contained in district boundaries that solidified the GOP’s dominance while weakening the influence of voters of color.

Of the 4 million residents the state gained since 2010, 95% were people of color. But throughout their mapmaking, Republicans manipulated boundary lines around communities of color and drew them into districts that diminish their voice.

Republicans who led the redistricting process have argued the maps were drawn blind to race and cleared by legal counsel for compliance with federal law, though they have declined to disclose how those conclusions were reached.

In its federal lawsuit, MALC challenges the new maps for Congress, the Texas House and the State Board of Education, saying they are intentionally discriminatory and mired in illegal racial gerrymanders. The caucus also raises specific claims on a litany of districts where they allege the Legislature packed and cracked communities of color to limit their electoral impact.

“The plans adopted by the State not only failed to increase Latino and minority opportunities for representation, they actually decreased them while increasing the number of districts in which Anglos form a majority of the eligible voter population,” the MALC complaint reads. “This turns the concept of representative democracy on its head.”

Echoing the two federal lawsuits already in the pipeline, MALC is also challenging the Legislature’s refusal to create additional districts in which Hispanic voters would control elections. Republicans, who had complete control over the redistricting process this year, declined to create those districts even as they reconfigured the congressional map to include the two additional U.S. House seats the state gained, the most of any state in this year’s reapportionment, because of its explosive growth.

Latino voters and organizations that represent them filed the first federal lawsuit last month before all of the maps were sent to the governor, arguing the new boundaries intentionally discriminate against them and would pull back on their influence on elections.

A second lawsuit dropped shortly after Gov. Greg Abbott signed the maps into law. Backed by an organization affiliated with former U.S. Attorney General Eric Holder, a group of voters and Voto Latino are seeking to overturn the state’s new congressional map based on claims that it dilutes the voting power of people of color.

Representatives for Abbott, who is named as a defendant, did not immediately respond to a request for comment on the lawsuits.

T-Squared: Happy birthday to us! (And many more.)H-E-B salutes troops with seasonal campaign for veterans