Texas hospitals are running out of drugs, beds, ventilators and even staff 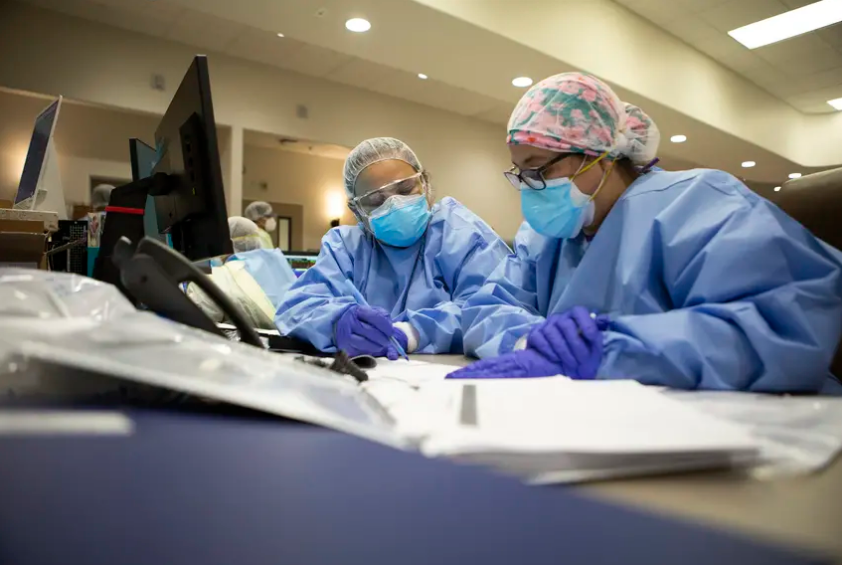 A coronavirus patient in Anahuac was flown by helicopter to a hospital in El Campo — 120 miles away — because closer facilities could not take him.

Ambulances are waiting up to 10 hours to deliver patients to packed Hidalgo County emergency rooms.

And short-staffed hospitals in Midland and Odessa have had to turn away ailing COVID-19 patients from rural West Texas facilities that can’t offer the care they need.

As the tally of coronavirus infections climbs higher each day, Texas hospitals are taking extraordinary steps to make space for a surge of patients. Some facilities in South Texas say they are dangerously close to filling up, while hospitals elsewhere are taking precautionary measures to keep their numbers manageable.

Doctors warn of shortages of an antiviral drug that shows promise for treating COVID-19 patients. And epidemiologists say the state’s hospitals may be in for a longer, harder ride than places like New York, where hospitals were stretched to capacity in the spring and some parked refrigerated trailers outside to store bodies of people who died from COVID-19.

“It used to [be that] if one hospital got kind of overwhelmed … you would start transferring out ICU patients to other facilities that had ICU beds available,” said Dr. Robert Hancock, president of the Texas College of Emergency Physicians. “And there really is none of that now, because everybody’s in the same boat and they’re struggling to get their own patients admitted.”

Cases of the new coronavirus have surged in Texas since Memorial Day weekend at the end of May, one month after Gov. Greg Abbott allowed a phased reopening of businesses. In June, Abbott scaled back parts of that plan, first pausing elective procedures in the state’s biggest cities in an attempt to conserve hospital capacity for COVID-19 patients, then ordering bars to close and capping restaurant occupancy at 50%.

Last week, he expanded the ban on elective procedures to more than 100 counties across broad swaths of the state, a sign of the increasing urgency of the virus’ toll on Texas hospitals. Then he warned that if the trend continues, he might order another economic lockdown.

“It’s going to be a rough few weeks,” said John Henderson, president of the Texas Organization of Rural and Community Hospitals. “Most everything we’re seeing is worrisome or scary.”

State data shows the hardest-hit regions include most of Texas’ biggest cities, as well as large swaths of South and Central Texas and the Gulf Coast.

Dr. John Zerwas, the executive vice chancellor for health affairs at the University of Texas System and a former state representative who is advising Abbott on coronavirus response, forecasted that July “will be a month for peak activity related to the epidemic.”

“Probably toward the end of the month, we’ll be seeing ourselves get into a bit more comfortable place,” he said.

Local officials in urban centers throughout Texas say more restrictions are needed now to slow the virus’ spread and keep hospitals from being overwhelmed in the future. On Sunday, Houston Mayor Sylvester Turner called on the governor to shut down businesses for two weeks.

Many Texas hospitals have stopped accepting transfer patients in order to maintain space for a surge that’s expected to come. In the Rio Grande Valley, that moment has already arrived, with hospital beds in short supply.

DHR Health, based in Edinburg, the county seat, is creating a third special COVID-19 ward in a facility normally used for physical therapy — after spending more than $9 million to convert a hospice center and rehabilitation facility into COVID-19 units.

“We’re full to the gills,” said Dr. Carlos J. Cardenas, chairman of the board at DHR Health.

In neighboring Cameron County, all of the hospitals were at or above capacity and holding patients in their emergency departments Monday, said Dr. James Castillo, the county health authority. Some were converting or eyeing areas not typically used for patient care, like conference rooms or lobbies, he said.

At Valley Baptist Medical Centers in Brownsville and Harlingen — which keep opening new units to care for critically ill patients — there were people waiting in the emergency room hallways for treatment this week, said Dr. Jamil Madi, medical director of the ICU in Harlingen. The hospitals are nearly out of ventilators and are starting to consider older models and disaster ventilators that are less optimal for treating the virus, he said.

Ambulances are sometimes waiting hours to deliver patients to the emergency rooms, said Mack Gilbert, chief operating officer of Med-Care EMS, which services most of Hidalgo County. Normally, the wait is less than 30 minutes, he said.

“You can’t blame the hospitals for being full. The ICUs are full,” Gilbert said. But “the longer [the patients are] with us, the longer it takes to get them the care they need. We’re not really set up for long-term care like that, for four to six to eight hours.”

The extended delay also leaves medics in the confined space of an ambulance with a COVID-19 positive patient for longer, increasing their risk of exposure to the virus even though they wear full protective gear, Gilbert said.

The state sent hundreds of medical personnel to South Texas earlier this month to alleviate staffing shortages. It also deployed a fleet of 10 ambulances to Hidalgo, of which Med-Care can use two for 12 hours a day.

Gilbert is grateful — “these guys are doing a great job.” But in a 12 hour shift, “they’re only able to do three calls, because each call is taking four hours,” he said.

In Houston, major hospitals have had to treat hundreds of COVID-19 patients in their emergency rooms as they await space in intensive care units. Data shows the dozen busiest hospitals in the area are increasingly telling emergency responders that they cannot safely accept new patients.

Ripple effects can be felt throughout the region, including at El Campo Memorial Hospital, about 75 miles southwest of Houston.

Under normal circumstances, hospitals in Houston’s world-renowned Texas Medical Center would accept transfers of medically complex patients from smaller regional hospitals that are less equipped to handle them. But with many Houston hospitals diverting patients away, smaller facilities like the 49-bed El Campo Memorial Hospital have taken them on.

On Monday, the hospital was caring for 18 coronavirus patients, including at least two who were admitted from Houston and the Anahuac patient who was transported by helicopter, said Nathan Tudor, chief executive of the Mid Coast Health System, which includes the hospital.

“Traditionally, if the complex cases need to go out, they do go to Houston,” Tudor said. “We’re just praying that this virus gets behind us sooner rather than later.”

In Dallas, some hospitals are gearing up for crisis as the number of admitted patients climbs. After requests from Abbott and Dallas Mayor Eric Johnson, federal medical teams are heading to Parkland Memorial Hospital, one of the city’s biggest facilities, to help treat an onslaught of patients.

Similar teams were already sent to Houston and San Antonio.

And for the next two weeks, Medical City Healthcare is suspending elective surgeries at 10 of its 16 North Texas facilities, even though the governor’s order allows such surgeries to take place outside Dallas County.

The pause will “enable us to safely and quickly expand capacity and staff to care for hospitalized patients,” spokeswoman Janet St. James said. “While we currently have adequate capacity, staff, and [personal protective equipment] — we are concerned that there is a misconception in the community that this rate of growth can continue.”

Meanwhile, short-staffed West Texas hospitals have been forced to turn away patients from rural areas, where small regional hospitals lack the resources to treat the sickest patients.

Earlier this month, Medical Center Health System in Odessa went on “diversion” — meaning it did not accept transfer patients from regional hospitals outside the county — as it faced severe staffing shortages. Currently, more than 20 staff members are out because either they or their family members have been exposed to COVID-19, said Trevor Tankersley, a spokesperson for the Medical Center Health System in Odessa.

Nearby Midland Memorial Hospital stopped accepting transfers of critical patients Thursday, spokeswoman Tasa Richardson said. At that point, the 286-bed hospital was treating 34 coronavirus patients. By Monday, the number had grown to 44.

It’s important that the numerous rural hospitals in the region have somewhere to send their patients, hospital representatives said.

“We know what it’s like to be in a small hospital outside of this area and not have the resources, and it’s difficult to turn down a request for a transfer to a higher level of care,” said Dr. Rohith Saravanan, Odessa Regional Medical Center’s chief medical officer. “There is really no option for that patient at that point — there’s no care they can provide that would give these patients a good fighting chance.”

But even larger hospitals face severe staffing limitations. At ORMC, nurses in the intensive care unit are working with twice as many patients as they normally would. In remote West Texas, there is a severe shortage of nurses, respiratory therapists, and radiology and medical technicians, he said. So the hospital is turning to more expensive contract labor.

“We have the bed capacity, we have [personal protective equipment]. … The capacity is limited mostly by staffing,” Saravanan said. “There isn’t any talent in the area that we can tap into.”

Farther west, El Paso’s University Medical Center is “doing OK on capacity and … able to handle all patients” under a surge planning process that was set up early on, said Ryan Mielke, the hospital’s director of public affairs.

Neighboring El Paso Children’s Hospital is prepared to offer up a number of its own units for adult COVID-19 patients if that becomes necessary, but “we are not close to reaching that right now,” said Audrey Garcia, director of marketing for El Paso Children’s.

“You just gotta pray that it stays on that curve,” Garcia said.

Health care workers urged Texans to wear masks, wash their hands frequently and avoid contact with others as much as possible to help prevent new coronavirus infections.

Disclosure: The Texas College of Emergency Physicians, the University of Texas System, the Texas Organization of Rural and Community Hospitals, and Parkland Health and Hospital System have been financial supporters of The Texas Tribune, a nonprofit, nonpartisan news organization that is funded in part by donations from members, foundations and corporate sponsors. Financial supporters play no role in the Tribune’s journalism. Find a complete list of them here.