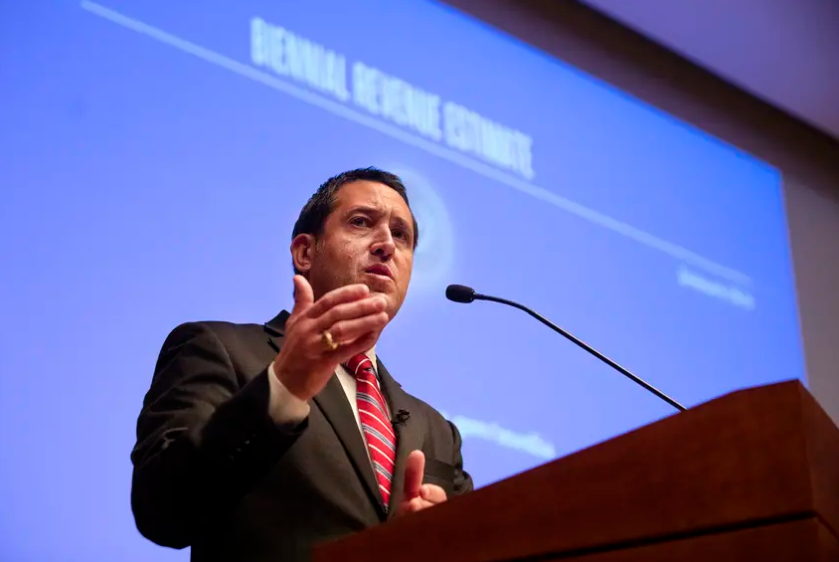 Texas Comptroller Glenn Hegar delivered bleak but unsurprising news Monday: Because of the economic fallout triggered by the coronavirus pandemic, the amount of general revenue available for the state’s current two-year budget is projected to be roughly $11.5 billion less than originally estimated. That puts the state on track to end the biennium, which runs through August 2021, with a deficit of nearly $4.6 billion, Hegar said.

Those figures are a significant downward revision from Hegar’s last revenue estimate in October 2019, when the comptroller said the state would have over $121 billion to spend on its current budget and end the biennium with a surplus of nearly $2.9 billion. The state, Hegar said, will now have roughly $110 billion to work with for the current budget.

Hegar’s latest estimate, he stressed in a letter to Gov. Greg Abbott and other state leaders, carries “an unprecedented amount of uncertainty” and could change drastically in the coming months, thanks to the pandemic and, to a lesser extent, a recent drop in oil prices.

“We have had to make assumptions about the economic impact of COVID-19, the duration and effects of which remain largely unknown,” Hegar wrote. “Our forecast assumes restrictions [on businesses and people] will be lifted before the end of this calendar year, but that economic activity will not return to pre-pandemic levels by the end of this biennium.”

Returning to pre-pandemic levels, Hegar said, would not happen until consumers and businesses are confident that the virus has been controlled.

“Even then,” he wrote, “it likely will take some time to recover from the economic damage done by the deep recession caused by the virus.”

While Hegar will issue a new estimate before the Legislature reconvenes for its regular session in January, Monday’s news provides the clearest picture yet for state budget writers, who will next year pass a “supplemental budget” to pay off bills from the current two-year budget. Hegar’s projected $4.6 billion deficit for the state, he said, does not include expected additional appropriations for Medicaid and other programs that were underfunded in the current budget.

Lawmakers will need to reckon with those shortfalls in addition to that projected $4.6 billion budget hole next session, which will increase the spending total and the ending deficit number. If lawmakers are to cut spending to balance the budget, those supplemental appropriations foretell bigger cuts than Monday’s estimate requires.

Hegar predicted Monday that the state’s oil-fed Economic Stabilization Fund, or the Rainy Day Fund, will have an ending balance of roughly $8.8 billion at the end of the 2021 fiscal year if lawmakers don’t tap that account to offset any deficits. That’s a slight drop from Hegar’s October estimate, which projected the savings account fund would have an ending balance of around $9.3 billion.

Hegar’s latest forecast takes into account several areas where spending in the current budget is lower than legislators anticipated: Rising property values mean local school districts are spending more on public education and the state is spending less; federal matching funds increased for health and human services programs, lowering the burden state taxpayers; and the first round of federal Coronavirus Aid, Relief and Economic Security Act funding covered what might otherwise have been state expenses to respond to the pandemic.

As the pandemic prompted economic shutdowns across the state, Hegar began raising concerns about the state’s budget and economy, referring to the financial fallout as a recession in conversations with lawmakers and other Capitol observers before most economists were publicly applying that label.

The decline of state sales tax revenue, the state’s single largest source of funding, has fueled those concerns, with Hegar’s office announcing earlier this month that revenue totaled over April, May and June was down 9.7% compared to the same period a year ago.

In an effort to curb that economic fallout, state leaders in May instructed certain agencies and higher education institutions to identify 5% in budget cuts for the current biennium. Those savings, which will reduce the projected shortfall, were not included in Hegar’s latest estimate, he said.

Ross Ramsey contributed to this report.

Disclosure: The Texas Comptroller of Public Accounts has been a financial supporter of The Texas Tribune, a nonprofit, nonpartisan news organization that is funded in part by donations from members, foundations and corporate sponsors. Financial supporters play no role in the Tribune’s journalism. Find a complete list of them here.