Texas’ Driver Responsibility Program ends next month. Here’s what that means for you. 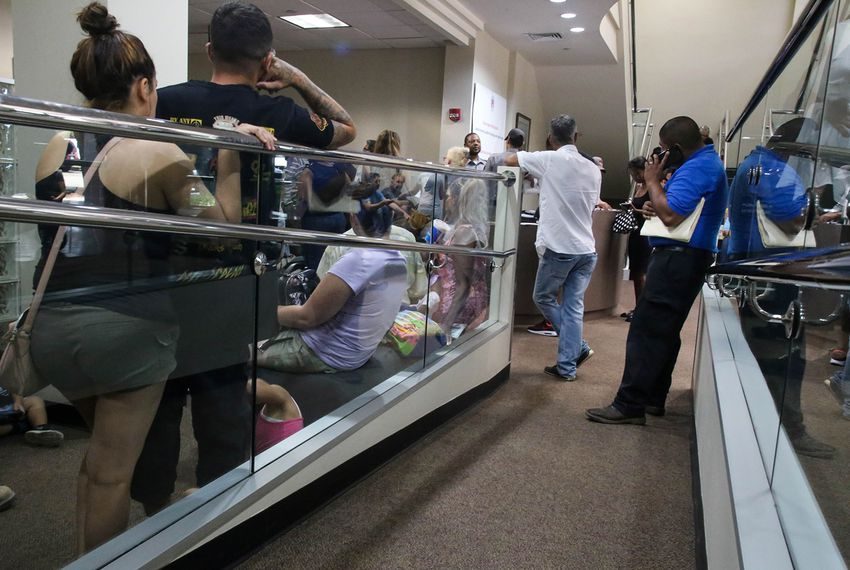 People wait at a driver license reclamation clinic in Austin on June 22, 2018. More than 600,000 Texans who lost their driver’s licenses through the Driver Responsibility Program will be immediately eligible to have them reinstated on Sept. 1. Image credit: Rachel Zein for The Texas Tribune

More than 600,000 Texans will immediately be eligible to have their driver’s licenses reinstated after the program’s Sept. 1 repeal. The system was widely criticized for adding additional annual fees on top of the price of tickets, but all pending surcharges will soon be waived.

By Troy Closson, The Texas Tribune.

After years of failed attempts to eliminate it, the Driver Responsibility Program will end on Sept. 1. A measure signed into law by Gov. Greg Abbott in June, House Bill 2048, shuttersthe 16-year-old program that left more than 1 million people unable to keep or renew their driver’s licenses. Lawmakers from both chambers and parties criticized the program for adding additional annual fees — ranging from $100 to $2,000 depending on the offense — on top of the price of traffic tickets. Texans had their licenses suspended if they didn’t pay or enter into a payment plan within a certain number of days. For many drivers, those surcharges grew to thousands of dollars on years-old tickets and left them without a license for, at times, more than a decade.

“It’s hard to overstate the harms of the program,” said Emily Gerrick, senior staff attorney with the Texas Fair Defense Project. “It created this really horrible cycle for drivers who lost their license because they couldn’t afford to pay thesurcharge. And then kept getting more surcharges because they didn’t have their license.”

Efforts to pass legislation previously hit obstacles, however, as those collected fees are used to fund the state’s emergency trauma center care system. But soon, that money will come from other sources, those surcharges will be waived and more than 600,000 Texans will immediately be eligible to have their licenses reinstated.

Here’s what you need to know ahead of the repeal:

Who is eligible to have their license reinstated — and how?

Of the nearly 1.5 million Texans who were unable to keep or renew their licenses under the Driver Responsibility Program, there are a few different groups drivers might fall into when attempting to get their licenses reinstated after Sept. 1:

Drivers whose licenses were expired for under two years may be eligible to replace them online. If more time has passed, drivers will have to re-apply and pass written, vision and driving tests before obtaining a new license.

What happens to unpaid surcharges?

All surcharges under the Driver Responsibility Program will be waived after Sept. 1 and no future fees will be assessed, according to the Department of Public Safety. Drivers will still be responsible for any other suspensions, fines or fees on their driving records. In the time between June and September, drivers are still expected to pay those surcharges — though DPS confirmed if someone’s license was already suspended under the program, they wouldn’t face additional penalties for not paying.

License suspensions that resulted from surcharges, however, will remain on drivers’ records.

Any payments made prior to the repeal will not be refunded.

Where will the state’s trauma care center system funding come from now?

About $70 million — or about half of all surcharge fees — has been directed toward the funding during each of the past few years, according to the Legislative Budget Board. That helped provide more Texans with reliable care for health crises: the number of state trauma centers reached about 290 in 2018 — from under 250 a dozen years prior. The elimination of the DRP slashes that funding, but numerous health systems and hospitals supported the repeal during the legislative session. Here’s why:

General state traffic fines, currently at $30, also are partially directed toward supporting trauma care. Starting Sept. 1, those costs will be hiked up to $50. The bill also tacked on $2 in additional annualcosts to automobile insurance fees.

Another source of revenue will come from higher fines for driving while intoxicated — which will increase from $1,000 to $3,000 for a first offense, and up to $6,000, depending on the blood alcohol level. The high fees worry some criminal justice advocates, but the bill also provides judges means to waive them for low-income Texans.

With the changes, the trauma center fund would see a net gain of $6.8 million over the next two years, according to the Legislative Budget Board estimates.

Does this mean drivers with unpaid traffic tickets can no longer lose their licenses?

The DRP is one of two ways drivers with unpaid tickets can lose their licenses. The other is through the state’s Omni program, which also takes away Texans’ licensesfor not appearing in court or paying court fines. About 300,000 drivers are ineligible to renew their licenses because of that system.