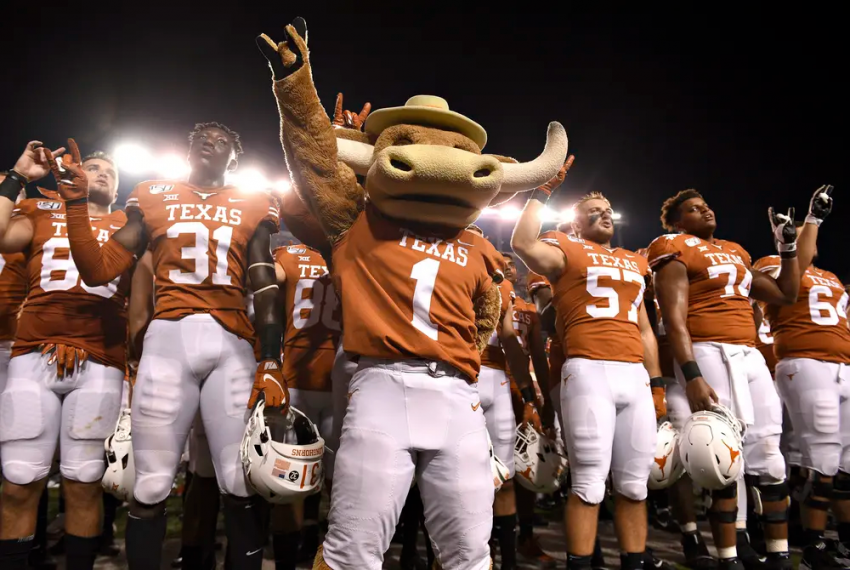 By  Sami Sparber and Stacy Fernández at Texas Tribune, September 11, 2020

In a typical year, he’d be tailgating before the game on campus, reuniting with his college friends, drinking beers and having “a good time.” This year, he’ll watch the game with his wife and puppy from the safety of his home.

“This is typically my Christmas,” said Flores, 33.

This weekend marks the start of an unusual season for major college football programs in Texas.

As the state continues to report thousands of new coronavirus cases a day and local health officials warn against in-person arena events, two Texas schools in the Big 12 Conference — UT-Austin and Texas Tech University — take the field on Saturday.

On Saturday, about 18,000 fans are expected to attend the Longhorns’ first game in person, said John Bianco, a spokesperson for the university’s athletic department, in an email.

UT-Austin’s Darrell K Royal-Texas Memorial Stadium holds a little over 100,000 people, but occupancy for football games has been limited to 25%. Outdoor gatherings in Austin are still capped at 10 people or less, but Gov. Greg Abbott has allowed Texas sports to resume with limited fans in the stands.

“Our tickets at 25% will be sold out,” Bianco said, adding that student ticketing is still being finalized.

Local health officials in Austin have repeatedly raised concerns about the dangers of hosting such a large, in-person event at this time.

“Our gathering limit is 10, and having 25,000 people in one space is a concern,” Mark Escott, Austin’s interim public health authority, said at a press conference Wednesday.

As of Friday afternoon, UT-Austin reported about 300 positive cases of the virus among students and staff since students returned to campus, according to a public dashboard.

“And, of course, if there is congregation happening at all, if there’s queuing and lines for bathrooms or concessions, it can increase the risk of transmission of the disease there,” Escott added.

UT-Austin game attendees must wear masks in the stadium and there will be signage and floor markings to encourage social distance. The university also added 225 hand sanitizer stations throughout the stadium.

Approximately 3,000 UT-Austin students who purchased football season tickets are required to take COVID-19 tests Friday and test negative before they can attend the game. The same precautions, however, won’t be required of the thousands of other fans.

While the Big 12 Conference and the Southeastern Conference, which includes Texas A&M, are pressing on with fall football, other leagues have opted not to play. In August, Big Ten and Pac-12 officials announced they were postponing the season over concerns that student athletes could get sick.

In June, 13 UT-Austin athletes tested positive for COVID-19, though the athletics department says the situation has drastically improved since then.

As of Friday morning, there were no active cases among UT-Austin or UTEP football players, according to the schools’ athletics officials.

In August, member schools of the Big 12 and SEC agreed to test athletes in football and other high-contact sports three times a week, far more than many other students on campus, including those who live in dorms.

“I think there’s still a lot of fans who are going to decide that they’re going to stay home and watch on television the first couple of games this fall,” UT System Chancellor James Milliken said Thursday during a Texas Tribune Festival panel. “But there will be some in the stands, and we believe that we can keep that safe.”

Also on Saturday, the Texas Tech Red Raiders are facing off against the Houston Baptist Huskies in Lubbock, where about 16,000 fans, or 25% of the total capacity, will be allowed into Jones AT&T Stadium.

“We anticipated a rise in cases as we returned to campus and we took this into account as we made our plans,” Texas Tech spokesperson Matthew Dewey said in an email.

Earlier this month, Lubbock experienced its highest single-day jump in cases since the virus was first reported in the city. Officials blamed off-campus parties hosted by Texas Tech students.

Beyond masks, social distancing and smaller stadium crowds, this year game days will look different at many Texas campuses.

Tailgating permits at UT-Austin were canceled this season. All Texas Tech sponsored tailgating events have been canceled, but lots will be open for individual groups of 10 or less starting three hours before kick-off.

Other universities are also cracking down on the day-long, drunken football parties.

“We have a small number of people that have reserved RV tailgating spots, and they are permitted to still use their season passes and park in their tailgating spot, but we’re discouraging any sort of large-scale tailgating parties,” said Courtney Scrivano, a Baylor associate athletic director.

Baylor is also allowing fans to “sailgate” by docking boats in the Brazos River marina alongside its McLane Stadium.

Texas A&M, scheduled to play its first game later this month against Vanderbilt University, has not announced its tailgating plan.

“We have a bit of an advantage here, I will admit, in that we’re in a smaller community,” A&M System Chancellor John Sharp said at Thursday’s Texas Tribune Festival panel. “We’re not in a Houston or a Dallas or an Austin or a San Antonio, where the population is more difficult to keep away from, but … we have absolutely no problem in knowing that we can play football, and we can do it safely.”

Some Texas universities have already kicked off pandemic-era football games with mostly masked fans spaced out in stadiums.

Last Saturday, Texas State University played at home against Southern Methodist University. The band was spread out and took up three sections near the end zone, cheerleaders sat in an adjacent area and neither performed on the field. Instead the groups’ performances from years past aired on the video scoreboard, the Dallas Morning News reported.

Still, many people did not wear masks, The News reported.

UTEP, who plays UT-Austin on Saturday, already played at home last week. An athletics official admitted the school struggled to make sure people kept their masks on and adhered to social distancing rules.

“There are just some people who feel like, ‘I don’t have to do this.’ And frankly, my message to those fans is, ‘Then don’t come to our game, because we do have these protocols in place for a reason,’” he added.