South Texas rancher gets the surprise of his life 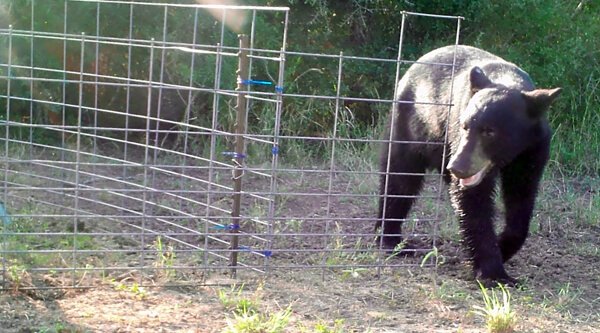 By The Devine News administrator, October 28, 2020

One South Texas rancher got the surprise of his life as he checked his game camera last week. Jesus Cadena is the 4th generation owner of the family ranch located less than 5 miles outside the community of Benavides. The 100-acre low-fence ranch has been in the family for well over a hundred years since his great-grandfather Liborio Cadena came to Duval County in the early 1900’s, and it was passed down through the generations.

“This was a first for me….I’ve seen a lot of animals on that camera, but never a bear!” said Jesus Cadena Jr in an interview this Monday. “And then when I looked at that game camera and saw the October 20th date– I was like wait a minute–I was right there in that deer blind that same day, about thirty minutes after the bear had come through. The camera caught the bear at 5:02, and I was up in that ladder deer blind around 5:30 with my bow. It’s a good thing that bear didn’t walk out while I was up there in that blind because I wouldn’t have known what to do. I might have shot it, and it turns out they are a protected species, and there’s a big fine for that.”

“I sure didn’t want to tell my wife there was a bear at the ranch!”

“The Game Warden did come out here and explained everything about Black Bears being a protected species. He said this was the first confirmed sighting with a picture of a bear in Duval County this far up from the border,” Cadena said.

The ranch is located right between Laredo and Corpus Christi. For reference, it’s about 2 hours from the Devine area and about 124 miles southeast.

“They say bears are crossing the Rio Grande and coming over because their habitat is being developed over there. I’m not sure, but I know he traveled a long ways to get here because we are a long ways from the border,” Cadena said. “Some people are saying that bears are making a comeback South Texas.”

According to Texas Parks and Wildlife, if you judge by recent reported sightings, the Black Bear is making a significant comeback in Texas. However, they point out “[The] public interest in an animal often has a way of fueling additional sightings, especially during poor visibility conditions. This is true not only with bears but many other elusive and intriguing animals, such as Mountain Lions or sharks. In other words, some of the bear reports could be false.”

But well-documented sightings like this one in Benavides have definitely caught the attention of area ranchers.

“This deer feeder where the picture was taken is about 30 yards from a pond, so I’m thinking he must have been thirsty because he didn’t seem to be after the corn,” Cadena said. “On the game cam you can see the cattle panels I have around my feeder to keep the pigs out, and from that, I’d say that bear is about 3 ft tall when standing on all fours. It’s an adolescent they say.”

“I just wonder what they are going to eat around here? Pigs? Rabbits? I hope they eat pigs! That would be perfect because humans cannot control the pig population. Maybe bears can,” Cadena added with a laugh.

“When the game warden came out we looked and looked for tracks but couldn’t find any because of the way the pigs tilled up the ground all around. They say a bear won’t come after you unless you get between a mama and cubs or something. I know humans aren’t on their menu. They eat berries, plants, fish, and things like that as well.”

“I have a buddy who lives in Albuquerque where bears are a big nuisance, and he told me that sometimes they will relocate a bear 30-40 miles away, but sometimes they’ll just keep coming back to the place it considers home,” Cadena said.

According to another credible source, there have been tracks found in Carrizo Springs, and other sightings in Laredo, as well as a dead bear, found on highway 90 in the Brackettville area, and one turned over to TPWD from Maverick County a couple of years ago as well.

According to a June 2020 news release from Texas Parks and Wildlife, there has been increased black bear activity across the Trans-Pecos region (West Texas along the border).

“Once considered to be extinct in Texas, black bears have steadily recolonized the Big Bend region and other areas of west and southwest Texas since the last decade of the twentieth century. The natural restoration of populations in west Texas has recently resulted in bears being spotted in more populated areas. Texas Parks and Wildlife Department biologists say the dry spring weather conditions have left bears on the move in search of food leading to an increase in sightings in the area,” the news release says.

“There has been a flurry of bear activity in the Trans-Pecos recently. Reports of black bears wandering into Fort Davis, Alpine, and Fort Stockton were received this past week on Wednesday, Friday, and Saturday, respectively,” said Michael Janis, Trans-Pecos District Leader.

“Bears have an excellent sense of smell and much of their behavior is driven by their appetite. These natural characteristics can, however, become a problem when bears find an easy meal from a human-related source such as garbage, pet food, or corn from a deer feeder. If over time a bear continually finds food around humans, it can become habituated, losing its fear of people and creating a potentially dangerous situation,” it adds.

“An ounce of prevention is worth a pound of cure when it comes to preventing conflicts with bears.”

Residents in areas where bears have been spotted should secure anything that could be a potential attractant (e.g. garbage, pet food, bird and deer feeders, etc.). Residents can also choose to invest in bear-proof garbage dumpsters, a recourse that many communities in the western U.S. have deployed to reduce or prevent bear encounters. Double-bagging garbage to reduce odors and keeping bags in a secure location until the morning of trash pickup is also encouraged to practice. Similarly, TPWD biologists recommend feeding pets inside or limiting pet food portions to an amount that can be consumed completely at each feeding.

Particularly challenging to manage is the Texas culture of attracting and feeding deer. Bears are sensitive to electricity, however, so electric fences can be used to prevent bears from accessing feeders while still allowing deer to reach them because of their ability to jump the fence. Although an added cost, electric fencing can pay for itself in the prevention of lost feed and damage to a feeder.

Black bears are currently a protected species in Texas. If you see a bear, please stay away and do not attempt to feed it. If you are in an urban or developed area, notify your local police or sheriff dispatch immediately and request that they contact the local Texas Parks and Wildlife Game Warden. Noting the bear’s size, direction, speed of travel, and behavior, especially when it is feeding in town, will greatly aid authorities in determining how to respond.

TPWD is interested in documenting all sightings of bears and encourages reporting any sightings to a local biologist. Biologists can provide technical help on electric fence specifications and other ways to secure attractants. Residents can find a local biologist and more information about bear safety on the TPWD website.