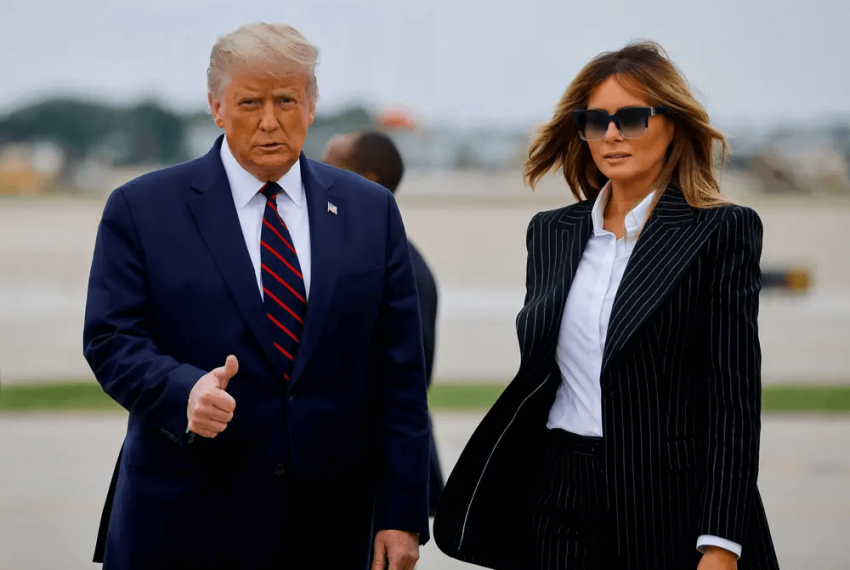 By Josh Dawsey and Colby Itkowitz, The Washington Post on the Texas Tribune, October 2, 2020

President Donald Trump and his wife, Melania, have contracted the coronavirus, White House officials said, after months in which he has played down a pandemic that has killed more than 205,000 Americans and sickened millions more.

Trump, 74, was diagnosed hours after it became publicly known that Hope Hicks, a top Trump aide who traveled with him on Air Force One and Marine One this week, tested positive Thursday morning.

The president’s physician, Sean P. Conley, wrote later that Trump and his wife “are both well at this time, and they plan to remain at home within the White House during their convalescence.”

An aide who saw Trump late Thursday said he seemed normal and did not show any symptoms, though he was aware of Hicks and her condition. Hicks is showing symptoms, officials said. Aides said all of his political events will be canceled for the foreseeable future.

After White House officials learned of Hicks’ symptoms, Trump and his entourage flew to New Jersey, where he attended a fundraiser and delivered a speech. Trump was in close contact with dozens of other people, including campaign supporters at a roundtable event.

Late Thursday, Trump tweeted that he and the first lady, who traveled with Hicks and the president Tuesday, were in quarantine.

“Hope Hicks, who has been working so hard without even taking a small break, has just tested positive for the coronavirus 19. Terrible! The first lady and I are waiting for our test results. In the meantime, we will begin our quarantine process!” he said.

Trump’s announcement was an extraordinary turn for the first family, coming little more than a month before Election Day and as Trump has escalated his campaign pace in an effort to catch Democratic nominee Joe Biden, who leads in national and key state polls. He trails largely, aides and voters say, due to his handling of the virus, which has dominated voters’ attention along with the economic collapse caused by pandemic shutdowns.

Even as the virus exploded around the nation, Trump has continued to hold large events featuring mostly maskless crowds of people who squeezed together to greet the president. Trump has regularly appeared in public and in private without a mask, and has mocked Biden for wearing one and for curbing his campaign events. Many of Trump’s aides also have eschewed masks, both in the West Wing presidential offices and on trips.

Hicks is among Trump’s closest staffers and regularly enters the Oval Office multiple times a day, meeting with White House and campaign aides.

She has been spotted on multiple occasions without a mask, along with other top aides. She tested positive after showing symptoms at a rally Wednesday.

Hicks, 31, served as Trump’s 2016 campaign spokesperson from the beginning of his candidacy and then as White House communications director before leaving in March 2018 for a job at Fox News. She returned to the White House in February in the role of counselor to the president.

Trump told Fox News’s Sean Hannity during a live interview Thursday night that he and the first lady were tested after they learned about Hicks and were awaiting the results.

Trump later tweeted that he and the first lady “In the meantime . . . will begin our quarantine process.”

Trump suggested Hicks could have contracted it from members of the military or law enforcement.

“It is very, very hard when you are with people from the military, or from law enforcement, and they come over to you, and they want to hug you, and they want to kiss you because we really have done a good job for them,” the president said. “You get close, and things happen. I was surprised to hear with Hope, but she is a very warm person with them. She knows there’s a risk, but she is young.”

Hicks traveled with the president to Pennsylvania for a rally Saturday, to Cleveland for the first presidential debate Tuesday and to Minnesota for another campaign rally Wednesday.

She was photographed without a mask at the Pennsylvania rally clapping to the Village People’s “YMCA” with other Trump aides and in Cleveland on the tarmac deplaning Air Force One.

A person familiar with the situation said Hicks was quarantined on the plane trip back from Minnesota on Wednesday night after showing mild symptoms. She tested positive Thursday morning.

“The President takes the health and safety of himself and everyone who works in support of him and the American people very seriously,” said Judd Deere, a White House spokesperson. “White House Operations collaborates with the Physician to the President and the White House Military Office to ensure all plans and procedures incorporate current CDC [Centers for Disease Control and Prevention] guidance and best practices for limiting COVID-19 exposure to the greatest extent possible both on complex and when the President is traveling.”

Hicks is the most senior White House aide known to have tested positive. Vice President Pence’s spokesperson, Katie Miller, caught the virus in May, and Kimberly Guilfoyle, Trump campaign finance chair and girlfriend of the president’s son Donald Trump Jr., contracted the virus in July. Before Hicks, the most senior White House official to test positive was national security adviser Robert O’Brien in late July.

The White House administers daily coronavirus tests to aides, reporters and others who come into contact with the president. But public health experts warn they are not foolproof and that masks and social distancing are still the best protection against the virus.

At Tuesday’s presidential debate in Cleveland, Trump was pressed on his insistence on having huge campaign rallies where no one is required to wear facial coverings or to socially distance.

Biden shot back: “He’s been totally irresponsible the way in which he has handled the social distancing and people wearing masks, basically encouraged them not to,” Biden said. “He’s a fool on this.”

“If you could get the crowds, you would have done the same thing,” Trump said. “But you can’t. Nobody cares.”