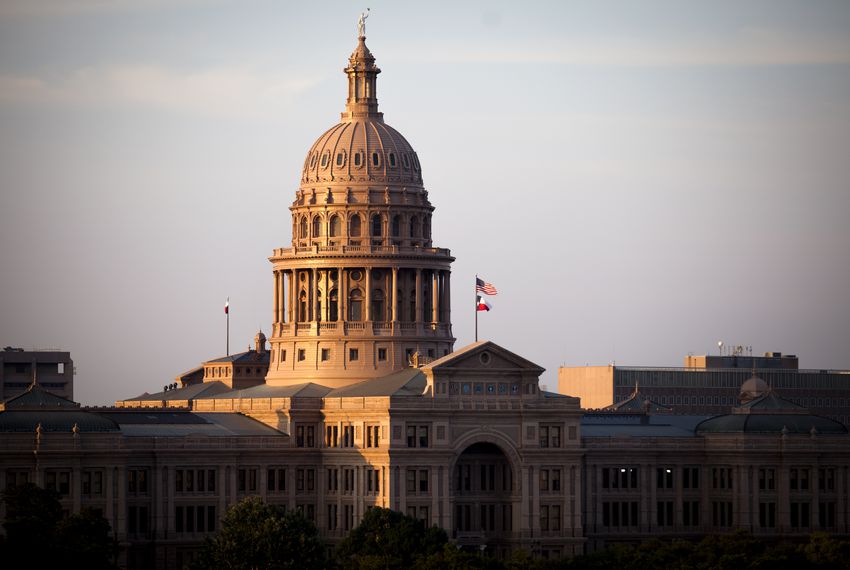 Democrats are effectively nine seats away from the majority in the Texas House, a major prize ahead of the 2021 redistricting process.  Austin Price for The Texas Tribune

The reports, which were due Wednesday, provide the first fundraising checkpoint since the candidate fields were finalized last month.

By Patrick Svitek , The Texas Tribune.

The fight for the Texas House came into focus Thursday with the release of the first major wave of campaign finance reports since the battlefield was set.

Across targeted districts, most incumbents in both parties are at least holding their own in the money race andstaying ahead of potential general election challengers, some of whom have their own primaries to get through first. The latest filings, which covered the past six months in most cases, also illuminated the growing constellation of groups devoted to the House fight, which Republicans are regrouping for after the downfall of Speaker Dennis Bonnen a few months ago.

Democrats are effectively nine seats away from the majority, a major prize ahead of the 2021 redistricting process. They see as many as 22 pickup opportunities, eying seats where Republican incumbents won by less than 10 percentage points last time and where Beto O’Rourke won or came within 10 points as well.

Democratic leaders are confident the majority is within reach. During a media briefing Tuesday in Austin, the House Democratic Caucus chairman, Rep. Chris Turner of Grand Prairie, predicted there is a “very good chance” that his party controls the chamber a year from now and detailed steps he was taking to ensure the caucus is “prepared to govern.”

First, though, Democrats have to protect the 12 seats they picked up in 2018. Most — but not all — of those freshman are in healthy financial shape. Reps. Ana-Maria Ramos of Richardson and Rhetta Andrews Bowers of Garland were easily out-raised by challengers Linda Koop and Will Douglas, respectively, whoalso have more cash on hand. Still, the Republicans have their work cut out for them; the districts held by Ramos and Bowers are considered among the more difficult for Republicans to flip back based on recent margins.

At the briefing, Austin Rep. Celia Israel, chairwoman of the House Democratic Campaign Committee, pointed to Reps. Julie Johnson of Carrollton and John Turner of Dallas as exemplary fundraisers among the freshmen. Johnson raised $159,000, dwarfing the haul of her late-arriving Republican challenger, Karyn Brownlee, while Turner posted a $251,000 haul, roughly $60,000 more than his GOP opponent, Luisa del Rosal, took in.

“There’s two outstanding freshmen who’ve done very, very well with their resources, and … they’re all gonna get our full support, but I would say I’m more concerned with those that have not raised the six-digit figures in their campaign coffers, but that’s part of where HDCC comes from, is to help with that revenue,” Israel told reporters.

The Texas GOP did not respond to a request for comment on the latest reports.

While no targeted GOP incumbent was out-raised by a single challenger, some are waiting to see who emerges as the Democratic nominee against them — and making clear that they are ready. One of the most vulnerable Republicans, Dallas Rep. Morgan Meyer, hauled in a hefty $322,000, while the three Democrats vying to take him on posted totals ranging from $27,000 to $153,000. Shawn Terry was the top fundraiser.

Then there are a few open seats where the reports added new clarity to which candidates are the most viable. Take, for example, House District 92, where three Republicans and two Democrats have lined up to replace retiring Rep. Jonathan Stickland, R-Bedford, a top-tier target for the blue team even before he announced his retirement last year. Democrat Jeff Whitfield had the most impressive top lines, raising $120,000; loaning himself $15,000; spending $13,000 and keeping $121,000 in reserves.

The potential general election fights are taking shape as it continues to be a relatively quiet season for primary challenges. The latest reports confirmed the lack of viable primary challengers, at least for now, as very few posted the kind of numbers that could scare incumbents. There were a couple of exceptions, though. Rep. J.D. Sheffield, R-Gatesville, has a primary challenger, Cody Johnson, who is largely self-funding and outspent Sheffield nearly 3 to 1 over the last six months while building a 4-to-1 cash-on-hand advantage. On the Democratic side, Houston Rep. Harold Dutton faces a primary opponent, City Councilman Jerry Davis, who kicked off his bid with a $140,000 transfer from his council campaign account, immediately pulling ahead of Dutton in the money race.

The groups that have previously played aggressively in primary battles — PACs like Empower Texans and Texas Right to Life — hadlittle significant financial activity, while their affiliated donors continued to keep a mostly low profile. One big exception to that: conservative megadonors Farris and Jo AnnWilks, who contributed $500,000 of the $610,000 that their son-in-law, Jon Francis, raised in the four-way primary to succeed Granbury Rep. Mike Lang, who is not seeking reelection.

The reports also shed light on the cluster of Republican groups expected to defend the House majority — an effort that took on new urgency after Bonnen was forced to announce his retirement in late October amid scandal. Bonnen had poured $3 million of his campaign funds into a new PAC, Texas Leads, to save the majority, and his downfall has begged the question of what will happen to that money now that he is on the sidelines.

The answer: Largely nothing for now, according to the Texas Leads filing made public Thursday. The PAC’s balance remained around $3 million after it raised $105,000 over the last six months and spent $111,000, all on overhead costs such as staff salaries and office supplies.

Newer Republican PACs are trying to fill the void, making for a less centralized effort than Democrats have with the House Democratic Campaign Committee. There’s Leading Texas Forward, which some House Republicans started in early November with famed strategist Karl Rove as its treasurer. The group raised $506,000 through the end of the year, with its biggest donations — $50,000 each — coming from Reps. Charlie Geren of Fort Worth and Four Price of Amarillo.

Meanwhile, the campaignarm of the House Republican Caucus took in $298,000 during the second half of 2019. While there was a bit of overlap — Price donated to both, for example — the members who funded the caucus PAC were largely a different crowd than those who chipped in to Leading Texas Forward.

Republicans can at least rely on more established groups that are set to play major roles in state House races. Texans for Lawsuit Reform, which often backs the GOP, entered 2020 with $10.5 million cash on hand, while Associated Republicans of Texas had $1.3 million in the bank.

On the Democratic side, the House Democratic Campaign Committee is serving as the main vehicle in the battle for lower-chamber majority — “mission control for nearly 30 House races,” Israel said. It raised $291,000 in the second half of last year, and along with an affiliated fund, it doled out $105,000 to all 12 endangered freshmen, with most getting $10,000 each.

Beyond the HDCC, several other entities are bringing in six figures each to help Democrats flip the House. Late last month, San Antonio Rep. Trey Martinez Fischer transferred $350,000 from his campaign account to his One Texas PAC that he plans to use to aid in the House fight. Annie’s List, which works to elect Democratic women who support abortion rights, pulled in $311,000 over about the last two months. And Turner, the caucus chairman, raised $327,000 forhis campaign fund over the last six months — money that he can put toward the majority battle as he runs for reelection unopposed.

A newer group, Texas House Majority PAC, formed earlier this month and did not have to disclose its fundraising this week as a result. But it has already raised $500,000, according to its treasurer, Patsy Woods Martin, the former executive director of Annie’s List — and one of over two dozen high-powered names that have signed up with the group. Without taking sides in primaries, the PAC is focusing on earlier-than-usual investment in battleground races, with plans to make all its campaign contributions by the summer.

Before Democrats can get a shot at the majority in November, though, they are focused on flipping House District 28 in a Jan. 28 special election runoff. The nationally targeted race pits Democrat Eliz Markowitz against Republican Gary Gates for the seat vacated last year by former state Rep. John Zerwas, R-Richmond.

The latest campaign finance reports in the race followed a trend from the last filing round: Aided by significant national and statewide support, Markowitz continued to easily out-raise Gates in contributions — $244,000 to $25,000 — while he continued to make up the difference with massive self-funding. He loaned himself another $460,000 during the latest period, Oct. 27 through Dec. 31, bringing his self-funding total for the race to more than $1 million.

The Democratic Legislative Campaign Committee, which has already invested $100,000 in Texas this cycle, singled out the HD-28 runoff during a reporter briefing Thursday in Washington, D.C., announcing it was dispatching an aide to the district to help Markowitz in the home stretch. Its president, Jessica Post, is heading to the district this weekend to knock on doors.

Both inside and outside Texas, Democrats are trying to keep expectations in check, noting the seat was always going to be one of the bigger challenges on the path to the majority. Zerwas won reelection in 2018 by 8 percentage points, while O’Rourke lost the district by 3.

“It would really be earth shattering if we were able to win it,” Post said at the briefing. “If we’re able to win it, it says that our odds to flip [the] Texas [House] are better than we thought they were.”

Why we are hard-wired to worry, and what we can do to calm downSteven Larry Gaultney