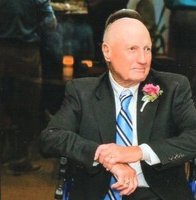 He was born on January 3, 1926, on the Chisum ranch in Rio Frio, Texas to James Edgar and Janie (Leistikow) Chisum. Carl attended school in Rio Frio and Leakey, Texas.

Carl Welton Chisum and Feleta Jean Crider were married on the 29th of May, 1948. Carl and Feleta built the Leakey Mercantile in May of 1950. They owned and operated the business for twenty-four years. Due to health reasons, Carl sold the operations side of the store. He continued to ranch and take care of his land.

Carl’s joy in life was spending time with his family and friends. You often found him surrounded by family and friends telling stories and reminiscing of the good old days. He enjoyed fishing, hunting and working on his tractor. He loved the Lord and was a faithful member of the Church of Christ in Concan, Texas.

Funeral services will be held 2 p.m. Saturday, December 28th, 2019 at the Concan Church of Christ in Concan. Officiated by Minister Chris Potter. Burial will follow in the Chisum Cemetery.

Arrangements are under the personal care of Nelson Funeral Home of Leakey, Texas.