Mask mandate appears to be helping in Texas, but experts ask Gov. Greg Abbott not to rule out a shutdown 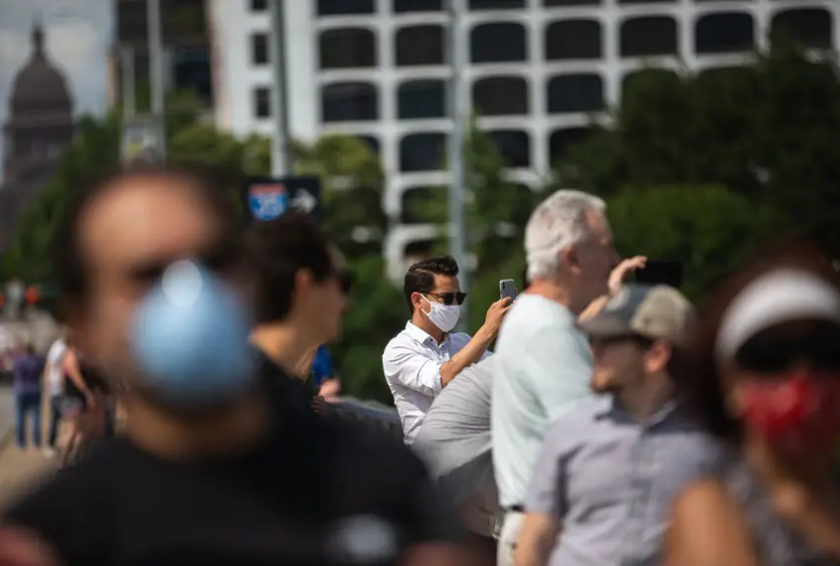 Three weeks after Gov. Greg Abbott required Texans to wear masks, epidemiologists and disease modelers say they are cautiously optimistic that the mandate is helping the state turn a corner in its efforts to contain an outbreak that has killed more than 4,500 Texans.

Throughout the summer, Texas’ coronavirus outbreak became grimmer by the day and by almost every metric: case counts, hospitalizations, deaths. But in the past week or so, Abbott and some of the state’s public health officials began to see hope in the daily case counts as they appeared to stabilize.

A growing body of evidence points to widespread mask-wearing as an effective strategy for containing the virus, and one North Texas researcher’s statistical analysis published this week argued that local mask orders in the region reduced viral transmission enough to avoid a lockdown. The governor, who has faced blistering criticism for his handling of the pandemic from members of his own political party, immediately seized upon those findings in defense of his statewide order.

“A community lock down is not needed as long as masks & other distancing strategies are used,” Abbott wrote Monday on Twitter, citing the analysis by Rajesh Nandy, a professor of biostatistics and epidemiology at the University of North Texas Health Science Center.

But public health experts warn that more restrictive lockdowns may still be appropriate in the state’s hardest-hit regions, as the disease continues to infect about 10 times as many people each day compared with two months ago, ravaging some parts of the state more severely than others.

State data now appears to show new daily infections leveling off, albeit at nearly record highs. There were around 9,100 daily new cases of the virus on average over the past week. The state recorded its largest number of daily new cases July 15, at 10,791. On Thursday, that number was 9,507.

“The downside is even though we are approaching another plateau, we are at a much higher level than in May,” Nandy said.

The average percentage of coronavirus tests coming back positive has also fallen over the past week.

Taken together, epidemiologists say those trends may indicate that Texas is reaching a plateau of new cases, where the number of cumulative infections climbs steadily, rather than exponentially. That would hardly represent a victory over the pandemic, but it would help keep hospitals from being overrun with sick patients.

Growing evidence in support of masks

While there is widespread consensus that more people wearing face coverings in public will slow viral spread, researchers disagree over how much credit to assign to the statewide mask order.

New cases of coronavirus each day

As of July 23, there are 361,125 cases in 250 counties. The average number of cases reported over the past seven days shows how the situation has changed over time by de-emphasizing daily swings. The number of new cases reported drops on weekends, when labs are less likely to report new data to the state.

“It is certainly possible the mask mandate is decreasing spread,” she said. “I hope that’s true, but it’s hard to prove.”

Disease modelers estimate a figure called the reproduction number, which essentially represents how many people, on average, a person infected with the coronavirus will pass it on to. A reproduction number above 1 signals rapid growth, a value of 1 indicates stable growth, and less than 1 means an area is experiencing a decrease in new cases over time and has slowed the rate of transmission.

In the state’s largest urban areas, including Houston and Dallas, researchers are more confident that the rate of transmission has slowed such that the regions’ reproduction numbers are now at or are slightly below 1.

“I think we can take credit in Houston for adopting a masking approach, and I do think it’s being helpful”

Chris Amos, the associate director of quantitative science at Baylor College of Medicine, who has modeled the rate of virus transmission in Houston.

Even if new case counts remain steady, Texas has a long way to go toward reducing the rate of viral transmission as other states have done. New York, for example, has reported an average of roughly 700 new cases per day in recent weeks, after an April peak of more than 12,000.

Disease modelers pointed to recent findings to bolster the idea that mandatory mask-wearing is a highly effective public health strategy — at least when there is widespread compliance.

In one study, researchers studied a group of 139 clients who visited a salon in Springfield, Missouri. Two hairstylists who had not been tested for COVID-19 but had respiratory symptoms associated with the disease, such as a cough or shortness of breath, worked with those clients over about a week.

Crucially, both the hairstylists and all of their clients wore masks, a requirement of a Springfield city ordinance and a policy of the salon, according to the report published July 14 by the U.S. Centers for Disease Control and Prevention. Both hairstylists later tested positive, but researchers found that none of their 139 clients developed COVID-19 symptoms.

“The citywide ordinance and company policy might have played a role in preventing spread” of the virus, the researchers wrote, and “broader implementation of masking policies could mitigate the spread of infection in the general population.”

In a second study, researchers examined the effects on health care workers in Massachusetts after a large hospital system in March required all workers and patients to wear surgical masks. The article, published in the Journal of the American Medical Association, found that health care workers were significantly less likely to be sickened by the coronavirus after the masking requirement compared with before.

After waffling on mask mandates, first prohibiting Texas cities from enforcing them and later issuing a statewide order, Abbott hopes to avoid the possibility of a business shutdown, which is even more unpopular among members of his party.

An Abbott spokesman did not respond to emailed questions Thursday.

But public health experts say shutdowns are an effective measure that may be appropriate in areas with severe outbreaks.

Even Nandy’s analysis, presented to government officials, academics and journalists this week, argued that a shelter-in-place order “should not be ruled out in the event of another surge,” a point echoed by epidemiologists across Texas.

In Austin, for example, University of Texas researchers wrote in an article published this week that “immediate and extensive social distancing measures” undertaken in March, including business closures, were necessary to ensure that hospitals weren’t overrun with COVID-19 patients by early summer.

In the Rio Grande Valley, a largely Hispanic region of South Texas where a surge of coronavirus deaths has led funeral homes to set up temporary morgues and crematoriums to run overtime, local leaders this week sought to impose another shelter-in-place order, but an Abbott executive order left it unenforceable and “simply a recommendation,” according to a spokesperson for the governor.

Around the same time, the state’s largest cities began to report signs that viral transmission had slowed. Conservative politicians, including state Sen. Paul Bettencourt, R-Houston, heralded the findings as reason to “keep the Texas economy open and fight the virus at the same time.”

Public health experts were left to debate whether a mask mandate was enough to bring down virus transmission in hard-hit communities — and what constitutes an acceptable rate of spread of a pandemic with disproportionate impacts along geographic and racial lines.

National polls have found broad support for mask mandates among Democrats and Republicans. But are mask mandates effective enough to take a shelter-in-place order off the table?

“There’s just not enough evidence either way,” said James Scott, a professor of statistics and member of the University of Texas COVID-19 Modeling Consortium.

“I understand that there’s an enormously difficult set of tradeoffs that have to be navigated when you contemplate locking the economy down,” he said. “But I think it would be premature to rule out the possibility of subsequent lockdowns if things got really, really bad.”

As school reopenings falter, some Texas parents hire private teachers. Others can only afford to cross their fingers.Salvation Army needs help with back-to-school drive