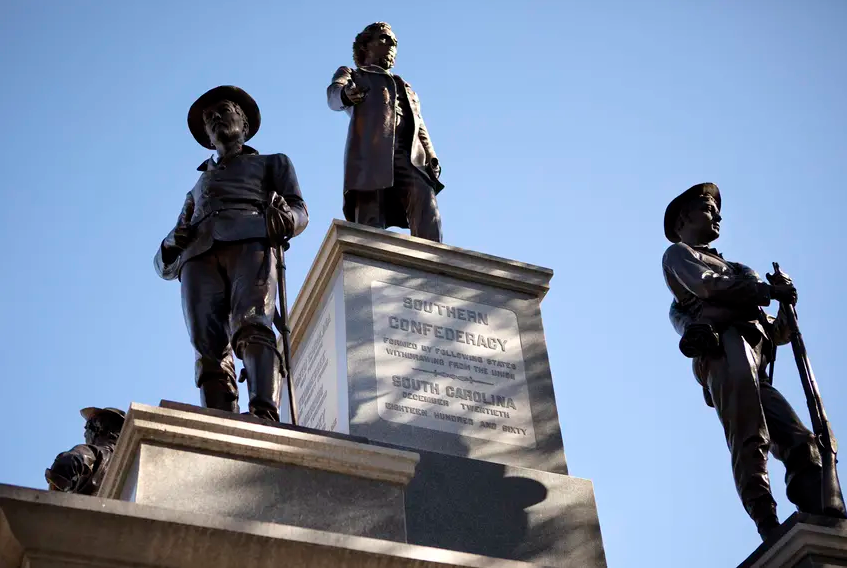 In response to a letter by Democratic state senators urging the removal of Confederate monuments and symbols at the Texas Capitol, Lt. Gov. Dan Patrick blamed Democrats on Monday for past discrimination in the state and said the party is not committed to a “sincere” or “serious conversation” about the future of the monuments.

He did not directly answer whether he supported removing the symbols.

“If you are truly sincere about a serious discussion, then you need to openly examine the role Democrats have played in our state’s history on this issue,” Patrick wrote in a letter to the Democrats. “It is time to be transparent. A first step in addressing these issues is for Democrats to acknowledge that it was your party who carried out those past discriminatory policies and injustices and who built those monuments and hung those paintings.”

That kind of rhetoric has become common in the era of President Donald Trump, but it ignores the history of how in Texas and the rest of the South, many conservative Democrats switched parties after their former party embraced civil rights legislation. Texas was dominated by white, conservative Democrats for the first three quarters of the 20th century, a time during which the state passed numerous racist laws that enforced or promoted segregation and violated the rights of Texans of color.

But Republicans have been in near-complete control of the Texas government this century, and in that time have passed multiple voting measures found by federal courts to have intentionally discriminated against people of color.

In the last decade alone, federal courts have repeatedly scolded the Legislature under Republican leadership for discriminating against voters of color in redrawing political maps that undermined the political clout of Hispanic and Black voters and in passing one of the strictest voter ID laws in the country that disproportionately burdened voters of color who were less likely to have the identification the state required people to show at the polls.

At the start of the most recent legislative session, about 80% of Democrats in the Texas Legislature were people of color, compared with about 4% of Republicans.

“Apparently Dan Patrick’s history book doesn’t go past 1960 and doesn’t account for the dog whistling and outright bigoted behavior that has come to define his party,” said Abhi Rahman, a spokesperson for the Texas Democratic Party. “Patrick’s logic makes no sense. We want to take down monuments of traitors. Patrick wants to bow down to them. It’s as simple as that.”

Patrick said he and Gov. Greg Abbott received a letter last week from the Senate Democratic Caucus requesting the removal of Confederate symbols on Capitol grounds, but it was the Democrats, Patrick responded, “who controlled the levers of government when these monuments were placed and paintings were hung.”

“I recognize that in every country in the world and every state in our nation, there are periods of injustice and inequality in our history that we lament,” he wrote. “But I believe that it’s what we have done as a nation, and as a state to correct those injustices, that defines us.”

The letter from the Senate Democratic Caucus comes months after the lieutenant governor named a special committee to review artwork in the Texas Senate chamber.

Democratic state senators penned a letter urging the removal of Confederate monuments and symbols at the Texas Capitol. DOWNLOAD

That committee — composed of four Republican senators and three Democrats — never met. A hearing planned for late last year was delayed because one of the Democrats on the panel was unavailable. It was rescheduled for earlier this year but was put on hold due to the ongoing coronavirus pandemic. Patrick said the committee will now meet after Election Day so “election-year politics” won’t intrude on the discussion.

Those numbers shift, however, when the race is factored in. Forty-three percent of Black respondents were in favor of the removal of Confederate statues and monuments on public property, compared with 16% of white people.

In January 2019, a state board that oversees the Texas Capitol grounds voted unanimously to remove a Confederate plaque that falsely asserts that the Civil War was “not a rebellion, nor was its underlying cause to sustain slavery.”

But later, during that year’s legislative session, the Texas Senate advanced a bill that would’ve expanded protections for historical monuments, including Confederate markers. The measure, introduced by state Sen. Brandon Creighton, R-Conroe, would require two-thirds of members in both legislative chambers to approve of the removal, relocation or alteration of monuments or memorials that have been on state property for more than 25 years. City or county monuments that have been up for at least 25 years could only be removed, relocated or altered if approved by a supermajority of the governing board.

Every Democratic state senator voted against the proposal after hours of emotional testimony. The proposal later died in the Texas House. But by refusing to vote for the bill, Patrick argued, Democrats halted giving “the state a pathway for a thorough and thoughtful review of monuments and symbols.”

“Instead, the only solution you offer is the one articulated in your current letter — to tear down every monument, take down every portrait, and remove all symbols that you don’t like without any discussion. That is not a ‘sincere’ or ‘serious conversation,’” he wrote.

Although there has long been a large debate at the Texas Capitol over whether to remove Confederate monuments, tensions surrounding race and addressing systemic racism came to a head in May after George Floyd, a Black man, was killed in Minneapolis police custody.

“Is there a way where all concerned can find common ground to address the issues you pose in your letter and at the same time not erase history? I firmly believe we can,” Patrick said. “But, sending a letter urging us to tear down everything that your party built over the years, implying that Republicans are at fault, is neither a path forward nor a solution that the majority of Texans want.

“At the end of your letter you state that the Democrat Senators stand in solidarity against racism and all forms of discrimination. Let me assure you that I and every Republican in the Texas Senate also oppose racism in any form.”