Kerrville Referee back on court after beating COVID-19 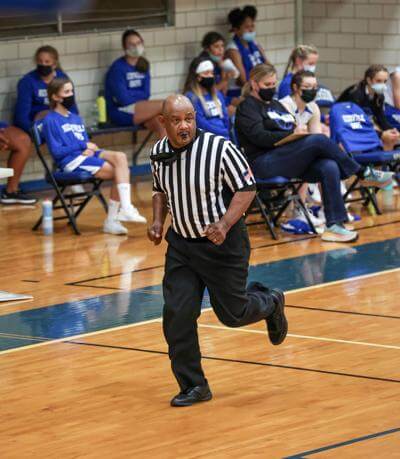 By Bonnie Arnold at the Hill Country Community Journal, Jan. 23, 2021

Thomas Frazier of Kerrville has been an officiating referee at multiple levels of basketball games for 20 years, starting with his on-court work in North Carolina.

He’s in his mid-60s now, a U.S. Navy veteran corpsman with service in Vietnam and with “underlying conditions as a cancer survivor,” and a familiar sight for coaches and fans in Kerrville area basketball games. He retired in December 2019 from the nursing service at the Kerrville Veterans Administration Medical Center.

What fans may not realize watching him keep the pace during the game with the players is that he is also now a COVID-19 survivor.

“I contracted COVID in May this year.”

He said he stayed at home sick with a headache and nausea, and when those symptoms didn’t go away, his wife took him to Peterson Health Emergency Room on May 7.

“My temperature was only 99 degrees when I first went in, but while they put in IVs and took me for X-rays, it went up to 103. But my tests for COVID were negative three times in a row,” Frazier said. “So they took me directly from the ER to the Intensive Care Unit. And they told my wife they were admitting me. I was having so much difficulty breathing that they put me on a respirator right away.”

He said he also had been hallucinating all day that same day.

Frazier said his temperature was still very high, and the Peterson staff made the decision to have him transferred for treatment at Audie Murphy VA Medical Center in San Antonio.

At least they tried to make that happen.

“Audie didn’t have any rooms. They were already full. So they took me to Methodist Hospital, near Audie. By that time it was 3 a.m. on a Friday.”

Frazier said the San Antonio VA found a room for him, after that, in their ICU; and that’s where he spent most of the next 10 days, on a respirator.

“They were feeding me through a tube. My fever was still high. They were giving me breathing treatments.”

Frazier said his wife arranged for him to have a phone conversation from there, with one of his daughters, in North Carolina. “But I don’t remember that now.”

He said they took him off the respirator while he was in Audie’s ICU; and finally moved him to a room on their fourth floor for two days.

“I’ve never been that weak in my life,” Frazier said. “I never would have made it through this, if not for God. I thank God for what he did for me through this – even though I don’t remember most of it.”

One result of this emergency that he does recognize is that he had knee replacement surgery at Peterson last September, and all the emergency COVID treatment thoroughly interrupted his rehabilitation plan.

“And my wife Melinda can just look at me when I walk in the door and tell if something is wrong.”

He is returning to his refereeing duties at basketball games.

That includes games for, and at, Hal Peterson Middle School, Tivy High School boys’ and girls’ varsity, junior varsity and ninth grade; Schreiner University, Our Lady of the Hills High School, and some summer “club basketball.”

“Now I’m refereeing two or three games per night, versus 10 games on a weekend between Friday and Sunday. I’ve done up to 33 games in a weekend.”

Referees are paid by the game, $30 per game, he said. And quarters in the games range from seven to 10 minutes long, depending on the school level. He has to be prepared to travel, too. Previously he’s worked at games in Llano, Mason, Junction, Del Rio and Rocksprings.

“There are 10 kids on the basketball court at once. If there are two or three officials, we each have certain areas to concentrate on.”

“The worst part of COVID is, it took away my oxygen supply,” Frazier said. “I’m also pastor at a small church here and taught a Bible study. But I get ‘winded” now, and started recording the Bible lessons on the computer and posting them for people to watch.”

He said he had two games scheduled to referee in San Antonio last Friday, and four others at the local YMCA.

“In Bandera they’re sanitizing the gym between games. Some places the bleacher sections are more separated now, and fans are only allowed to sit in alternate rows. And we’re cleaning the balls between quarters.”

Through all this, Frazier is still taking antibiotics, and getting breathing treatments.

“People who haven’t had this virus don’t know how deadly it is. But a lot of them don’t want to do the precautions. They need to know at the VA and other places, they would have no family or visitors,” he said. “It’s not something I’d wish on anyone.”

Frazier said his family includes eight children, and their ages range from 5 to 42 years old. The youngest two are the last ones still at home, and attending Kerrville schools.

He and his wife had already become fans of taking cruise line vacations, he said, and they plan to celebrate his recovery from COVID the same way.

“We had a couple trips already scheduled and paid for when this virus took me down. And the cruise lines were canceling things and notifying everybody. But they gave us a couple choices. They would refund all our money; or they would use that money to reschedule us on another trip and do some bonus things for us like upgrade our cabins,” Frazier said. “We talked about it and decided to have them reschedule us on two future trips.”

One he and Melinda have scheduled is just for the two of them, featuring stops from Cozumel, Mexico, to Honduras and back.

And next summer when school is out, he and the whole family will be taking a family cruise from Key West, Fla., to the Bahamas.