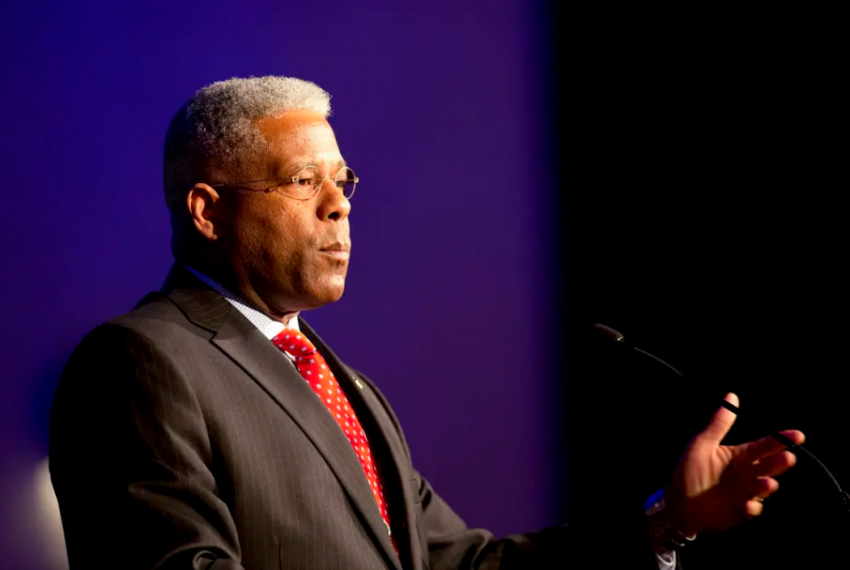 West claimed victory shortly before 3:30 a.m. Monday, while Dickey conceded about an hour later. The developments came during an early-morning round of voting among state Senate district caucuses at the party’s virtual convention.

“I wish Lt. Col. West the very best in this role. Thank you for the honor of serving as your Chair. Let’s win in November.”

James Dickey, who had been running for a second full term, wrote on Facebook

West moved to Texas several years ago and became politically active here. His victory means an abrupt change in party leadership with less than four months until one of the most challenging elections that Texas Republicans are facing in a long time.

West’s campaign said Monday morning he would “immediately resume the responsibilities of the role and begin to implement his strategy to hold Texas.”

“I am honored and privileged that Republicans of Texas have selected me to Chair their party and to be at the helm during this coming election cycle,” West said in a statement. “We need to focus on maintaining the conservative policies that made Texas strong and drive voter outreach across the state.”

Dickey’s concession came as voting was still underway for state party chair in the 31 Senate district caucuses. While the party had not announced results by the time Dickey conceded, there were reports that West was easily winning more caucuses than Dickey — far more than the three caucuses required to force a floor vote. Dickey’s statement indicated he did not plan to go that route.

West’s victory came amid a tumultuous convention that had unraveled on Dickey’s watch. There was so much dysfunction and delay that delegates voted late Sunday night to take up unfinished business at a second convention — after settling party leadership races.

The party’s vice char, Alma Perez Jackson, was also facing a challenge, from Cat Parks, who chairs the Hamilton County party and had led a candidate recruitment task force created by Dickey. There was no clear result in that race early Monday morning.

Dickey had campaigned on restoring the party’s finances and positioning it well for the November election through a renewed focus on fundraising, candidate recruitment and voter registration. During his closing statement Saturday morning, Dickey also impressed upon delegates how all-consuming the job, saying “this is a 24/7 job and I have been a 24/7 chairman.”

“Words matter, but work matters too — and results matter more,” Dickey said, repeatedly saying his “No. 1 priority” is to help ensure success for President Donald Trump and Texas Republicans in November. “This is what I’m focused on, folks — winning.”

In his final pitch to delegates, West promised to make the party better known nationally and adopt a more aggressive strategy against what he described as an increasingly extreme Democratic Party.

West also appealed to some in the party who have grown frustrated with their own leaders — namely Gov. Greg Abbott — for how they have responded to the coronavirus pandemic. West rallied delegates against what he said was the “tyranny that we see in the great state of Texas, where we have executive orders and mandates, people telling us what we can and cannot do, who is essential, who is not essential.”

West represented Florida’s 22nd Congressional District from 2011-2013. He built a national profile for his bombast, sparring with his House colleagues and railing against then-President Barack Obama. West came to Texas in 2014 to become the CEO of the National Center for Policy Analysis, a Dallas think tank that shuttered three years later.

The State Republican Executive Committee first elected Dickey to the post in 2017, after the resignation of his predecessor, Tom Mechler. Dickey won his first full term a year later at the state convention.

Before chairing the state party, Dickey led the GOP in Travis County, home to Austin.

West brought a high profile to the race and huge financial advantage, vastly out raising and outspending Dickey. While West stumped on building a more ambitious Texas GOP, he also courted support from some in the party who believe Dickey had grown too unwilling to stand up to state leaders when it came to the party’s legislative priorities and the scandal last year that forced House Speaker Dennis Bonnen into retirement.

But no issue overshadowed the closing weeks of the race like the party’s insistence on conducting an in-person convention in Houston despite the coronavirus pandemic. After the convention center operator nixed the party’s contract earlier this month, the party launched a legal battle to continue with an in-person convention. The party lost in the courts shortly before the convention was set to begin, leaving it with a short period to transition to a virtual gathering.

Despite promises that the party had a virtual backup plan all along, the convention opened Thursday with almost immediate technical problems, and the State Republican Executive Committee voted that night to pause the event for a day Friday to resolve the issues. When the convention came back Saturday, things were still rocky — delegates complained they had still not received credentials, committees took much longer than scheduled and livestreaming problems ruined speeches by some of the state’s top elected officials.

West largely stayed out of the convention debate until recent days, when he criticized Dickey for not having an adequate backup plan and questioned the voting technology for the virtual gathering. On Saturday afternoon, he joined calls for Dickey to halt the convention until every delegate could be credentialed.

Dickey acknowledged the pre-convention turbulence in his speech Saturday morning.

“This has been a humbling week and this path to our state convention today has been challenging,” he said, “but I will never give up on the Texas Republican Party.”