Democrat Eddie Lucio Jr., known for voting with Republicans on key issues, to retire after three decades in Texas Senate 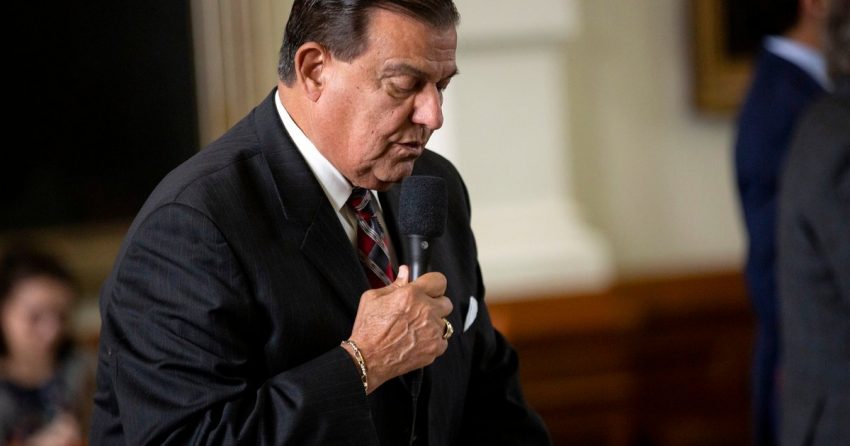 State Sen. Eddie Lucio Jr., D-Brownsville, announced Thursday that he is not seeking reelection after three decades in the upper chamber.

He made the announcement during a news conference in Harlingen, saying he was retiring “because a lot of wonderful things are yet to come in my life.” He said he wanted to spend more time with family “and to do some of the things that I’ve been wanting to do like my own personal ministry to help the less fortunate in our community.”

“I want to continue to fight for what’s right in our community for our families,” Lucio said.

Lucio’s decision comes as a surprise — earlier this year he announced he was running for reelection, and his office confirmed that remained his plan during the redistricting process this fall.

Lucio, vice chair of the Senate Education and Finance committees, has served in the Senate since 1991, making him the third most senior member. He became known as a stalwart advocate for the needs of the Rio Grande Valley — and for breaking with his party on some major issues, making him easily the most moderate Democrat in the Senate.

Lucio opposes abortion and voted in support of Texas’ new abortion restriction law that went into effect in September. He supports school choice, putting him at odds with fellow Democrats who believe it harms public schools. And he infuriated the LGBTQ community in 2017 when he voted for the “bathroom bill” that would have restricted transgender Texans’ access to certain public facilities.

Lucio’s independence has endeared him to GOP Lt. Gov. Dan Patrick, who regularly compliments him and has even campaigned for him. Patrick released an effusive statement on Lucio’s retirement, saying he has “lost a great friend and ally in the Texas Senate.”

Lucio said Thursday he urges “those in public service today to be bipartisan, to work together as brothers and sisters in Christ.” He also highlighted his abortion views, saying he has “never made a secret of my pro-life convictions.”

As for the lieutenant governor, Lucio praised Patrick while discussing his 2013 legislation to expand free breakfasts for Texas school children. Lucio said that proposal “would not be law today if it had not been for” Patrick, who was chairing the Senate Education Committee at the time.

“[Lucio] has always had the courage to put the interests of his district over those of his party and above national politics,” Patrick said in his statement, adding that Lucio “helped me become a better Senator and Lt. Governor, and a better person.”

Over his three-decade tenure, Lucio also pushed for infrastructure and higher education in the Valley, authoring legislation that paved the way for new institutions there, including a medical school.

Before serving in the Senate, Lucio served two terms in the House. He previously was a Cameron County commissioner and the county treasurer.

As a senator, Lucio faced his first real primary opposition in a while in 2020 and got forced into a runoff, which he won by a comfortable margin. Lucio was facing the prospect of another competitive primary next year, with state Rep. Alex Dominguez, D-Brownsville, exploring a run for the seat in Senate District 27.

Lucio’s 2020 primary runoff opponent, Sara Stapleton Barrera, could run for the newly open seat. She said in a statement she was “deliberating with family and supporters as to what will be done, but make no mistake we will be heavily involved one way or the other.”

Redistricting made SD-27 less safe for Democrats, changing it from a district that President Joe Biden won by 16 percentage points to one he would have carried by 6 points.

Lucio’s son, Eddie Lucio III, serves in the House and recently announced he would not seek reelection. A spokesperson said at the time that he did not plan to run for any other office this election.

Eddie Lucio Jr. has nonetheless spoken openly about his hopes for his son’s political future and devoted a section of his speech Thursday to praising him.

“I wish I could hand him the baton, but he’s got important things to do,” Eddie Lucio Jr. said.

In latest blunder, charges dropped against migrants arrested in Texas governor’s border crackdown because of faulty paperworkWhite House says big businesses must mandate vaccines or require testing by Jan. 4, regardless of what states like Texas say