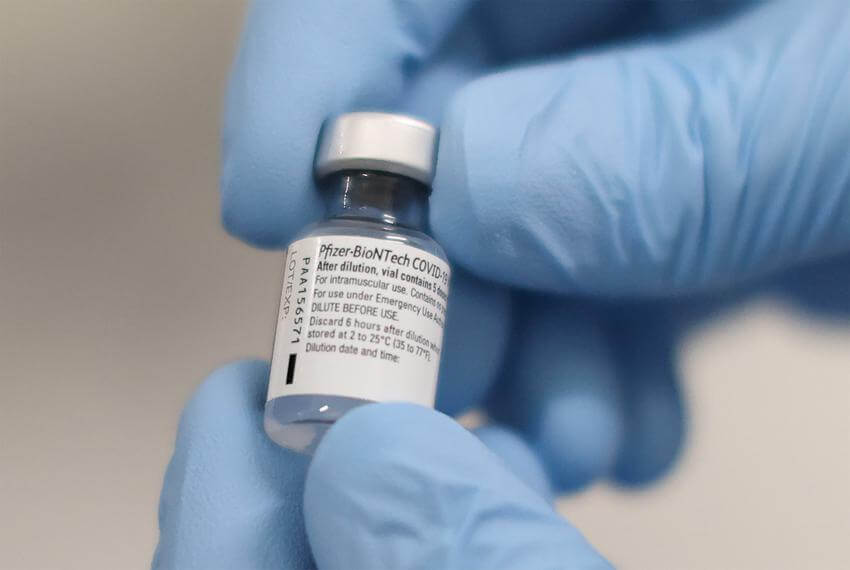 The first doses of the long-awaited COVID-19 vaccine are set to hit Texas soil on Monday, bringing hope to a virus-ravaged state even as the daily death toll soars to its highest point since the pandemic first swept the nation nearly a year ago.

Arriving at health care facilities around Texas after winning federal approval for emergency use on Friday, nearly a quarter-million doses of the Pfizer vaccine will start being injected into the arms of front-line medical workers who volunteer for the shot. Trucks carrying the doses began pulling out of Pfizer’s Michigan manufacturing facility on Sunday, according to news reports.

From the Rio Grande Valley to the Texas Panhandle and from the Gulf Coast to West Texas, some 109 medical facilities are slated to soon receive the first allocation of 1.4 million doses earmarked for Texas this year, said Chris Van Deusen, spokesman for the Texas Department of State Health Services.

“There is light at the end of the pandemic tunnel,” said Liz Youngblood, president of Baylor St. Luke’s Medical Center in Houston, which is set to get their allotted doses on Tuesday.

Van Deusen said 19,500 doses will be arriving at four sites Monday: The MD Anderson Cancer Center in Houston, UT Health Austin at the Dell Medical School, Methodist Dallas Medical Center and Wellness 360 at UT Health San Antonio. Another 75,075 doses will be arriving at 19 sites in 12 cities on Tuesday, including facilities in Edinburg, El Paso, San Angelo, Corpus Christi, Galveston, Amarillo and Lubbock, among others. Many of the early facilities are at universities. Vaccine doses for the remaining 86 sites will begin shipping later in the week, he said.

More vaccines are expected to arrive in Texas the week of Dec. 21, likely including doses from Pfizer and Moderna, whose vaccine is expected to get federal approval by the end of this week, Van Deusen said.

And while supply limitations mean that public availability of the vaccine is still months away, experts say, its arrival signals the advent of a new era of the pandemic where a return to pre-pandemic life is, for the first time, within striking distance.

Meanwhile, some small hospitals are still waiting for their chance to get access to the vaccine. They were left out this week because the first batch was only available in increments of 975 doses, Van Deusen said.

Injections at Midland Memorial Hospital, which will receive 1,950 doses this week, are expected to begin within hours after the vaccine arrives, with all initial doses administered by Dec. 23, said Val Sparks, an infection preventionist.

“They are excited about [it], even if they have to wear a button that says ‘COVID-proof’ or something,” Sparks said of the staff. “They want to get it so they can go on, get back to some form of normalcy in their lives.”

This also marks the beginning of a dangerous time of exuberance mixed with fatigue, when people will be tempted to let their guard down even as the pandemic continues to push hospitals to the brink of capacity amid the newest surge, said Tom Banning, CEO of the Texas Academy of Family Physicians.

“It’s really positive news that we made headway, but from a public health standpoint, we’re still probably in like the third inning or so,” Banning said.

Nonetheless, the heady anticipation of the first wave of inoculation against a virus that has claimed the lives of nearly 24,000 Texans and nearly 300,000 nationwide is hard to deny — particularly among Texas’ front-line health workers, who will be in the “first tier” of recipients and who have been struggling with their own tragedies while sacrificing health, home and family to save lives.

“Health care workers have been waiting for this day,” said David Lakey, a member of the Texas Medical Association COVID-19 Task Force and chief medical officer of The University of Texas System.

In El Paso, where the situation grew so dire last month that jail inmates were recruited to move bodies into refrigerated trucks, five hospitals were slated for a total of 6,825 doses in the first round.

A medical center pharmacy in San Angelo is on deck for 1,950 this week, while Doctors Hospital at Renaissance in the hard-hit Rio Grande Valley town of Edinburg is slated for 5,850.

The vaccine could ease some of the strain on workers and hospitals by decreasing the number of workers that need to be sent home with the virus, Lakey said.

“This gives them hope and release related to the pressure they have been on for a year now as they have responded to this event,” he said.

The “first tier” recipients include hospital-based workers who have direct contact with patients; staff of nursing homes or other long-term care facilities who work directly with residents; emergency medical services providers such as paramedics and ambulance drivers; and home health aides who manage “vulnerable and high-risk” patients.

If there are enough doses to go around, a “second tier” of health care workers will also be eligible to be vaccinated, including those who interact with patients in outpatient settings such as doctors’ offices; workers in freestanding emergency rooms and urgent care clinics; community pharmacy workers; public health workers who administer COVID-19 tests; mortuary workers such as medical examiners and embalmers; and school nurses.

Early estimates from the Texas Department of State Health Services found there are more than 5 million people who are vulnerable or work in front-line jobs that increase their exposure risk.

Those two things, along with the sheer size and population of the state, bring massive challenges to a scenario in which the stakes couldn’t be higher.

Injections could begin as early as Thursday at the University Health System in San Antonio, said Leni Kirkman, the system’s vice president of strategic communications and patient relations. Staff have been trained and feel well prepared, Kirkman said.

Identifying and reaching out to front-line workers is key because the vaccine isn’t mandatory, Kirkman said.

“We want to educate our staff and have them make their personal decision if they want to be in this first tier,” Kirkman said. “We’re reaching out to those folks.”

A few hours away in Harris County, Roberta Schwartz has been planning for the vaccine’s arrival at her hospital system, Houston Methodist, for months.

After requesting 15,000 doses, Schwartz, who leads the system’s COVID-19 incident command, found out early this month her system, which has eight hospitals and hundreds of other care facilities and service locations, would receive 13,650 doses this week.

“It is the most complicated logistical thing we’ve ever coordinated,” Schwartz said.

About a week and a half ago, Schwartz opened up a self sign-up system to let her staff schedule vaccinations starting Wednesday.

Schwartz said more than 11,000 medical workers have already signed up, and the system expects to vaccinate between 1,500 and 2,000 people per day.

After nearly a year of grueling hours at the hospital and worrying if they’re going to infect loved ones as they experience the immense pressure of facing this virus head on, many health care workers are hopeful it’s the beginning of the end, she said.

“For them, it’s hard to escape a COVID world, work or home,” Schwartz said.

At Baylor St. Luke’s, Youngblood said her hospital will receive about 5,800 doses in the first wave of the vaccine.

This weekend, she did a final walkthrough of the distribution process — encouraging people to sign up to get the shot and planning how and where to store the vaccines in the ultra-cold freezers they have on site.

A shadow over some of the excitement is the fact that so many hospitals and health care workers will still be waiting for the vaccine even as their colleagues in larger cities get inoculated this week.

Because the Pfizer vaccine is only allowed by the company to be ordered in increments of 975, Van Deusen said, smaller hospitals that don’t need that many were left off the first round of doses this week.

But when the Moderna vaccine becomes available, which officials anticipate before next week, doses may be ordered in batches as small as 100, he said — and that’s when Dr. Lane Aiena at Huntsville Memorial Hospital hopes his number will come up.

He worries, though. Aiena, who also has a small private practice as well as being a doctor at the hospital, said the small 123-bed facility in rural Texas was overlooked for months when personal protective equipment was scarce in the spring and fears they will be last in line again with the vaccine.

Huntsville, home to the state prison system, has been hard hit by COVID and has seen positivity rates in some parts as high as 23% at times, he said. His facility is enrolled in the state health system that determines which facilities get the allocations each week, but they have been given no date as of this week.

In Midland, Sparks said the hospital is planning to start slow, administering five vaccines in 15 minutes and using the first hour-and-a-half to work out any kinks in the process. Then, she is expecting to pick up the pace, administering five every 10 minutes.

The hospital began planning in mid-November, after Pfizer submitted its paperwork to the FDA and information became available about what kind of vaccine the hospital could receive.

“That was when we really geared up, because until things were provided to the FDA, we were just spinning our wheels,” she said.

To administer the vaccines, the hospital has put together a workforce of nurses, pharmacists and workers to control traffic flow and maintain social distancing.

Sparks said the hospital is still waiting to receive paperwork from the state to give to those who got vaccinated, including vaccine information sheets and a card that tells them which vaccine they got and when they need a second dose.

Those who get vaccinated will have to get a second dose 19 to 23 days after their first vaccine, and the hospital plans to schedule people for their second visit when they get their first dose, Sparks said.

While it is encouraging that front-line workers will soon be vaccinated, with the pandemic as bad as it’s ever been in the country, people must continue to social distance and wear masks until herd immunity is achieved, health officials said.

Of course, there is still no timeline for that.

Banning said it could be longer than anyone might want to admit.

“We’ve got a long way to go before this becomes widely available,” he said. “And all the things people hated doing, like masking and social distancing and other proven deterrents, are going to be required for the foreseeable future, the next several months and into this summer.”