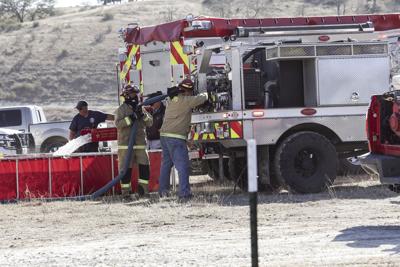 By Tammy Prout at the Hill Country Community Journal, Jan. 21, 2021

A coordinated effort led by Turtle Creek Volunteer Fire Department spared nearby residences and structures while a brush fire, fueled by high winds and dry conditions, scorched 200 acres of land in the 100 and 400 blocks of Fall Creek Road Thursday afternoon.

TCVFD Chief Wes Gordon reported a total 59 firefighter personnel from nine different departments fought the blaze for more than five hours to get it under control. It took another four hours to completely extinguish the flames.

“We received the call at 12:29 [PM],” Gordon said. “As we were arriving, I could see the smoke from Highway 16 and called to dispatch Center Point [VFD] to assist.”

After 30 minutes, Gordon said he requested additional help from other agencies.

“We had one structure in immediate danger, so we posted two trucks at that location to protect it and we were able to keep it safe,” Gordon said.

Due to the rural location, fire hydrants were available but not nearby, so Gordon set up a staging area and command center at the base of the hillside.

“The fire was contained in a valley area, so we posted our staging area near the road and set up our folding tanks to create a water shuttle system,” Gordon said.

As incident commander, Gordon assigned tankers to continually retrieve water from Aqua Texas water source locations to fill the portable tanks, which remained filled and used by the 15 brush trucks on the scene to fill tanks and fight the fire.

“Over the course of the day, we were able to use 30,000 gallons of water on the fire using our folding tanks and shuttle system,” Gordon said. “This system and equipment are key in fighting fires outside the city and where water availability is limited.”

The Texas Forest Service responded with six personnel and four trucks, including one brush truck, Gordon said, but air support was not available due to other fires burning in other parts of the state.

Gordon said the fire was under control at 5:45 p.m., at which time he began to release assisting departments.

“There was a total of five departments remaining on scene with us until we put the fire out at 8:46 [PM],” Gordon said.

Gordon said he believes the fire may have started from a controlled burn that was conducted three days earlier.

“We think some of the embers were picked up by the high winds and ignited a dry, grassy area nearby,” Gordon said. “I would really like to urge citizens to refrain from burning anything right now, but definitely check with the county to see if a Burn Ban is in place first.”

Gordon said the number to call to check if a Burn Ban is in effect is (830) 792-HEAT. He said citizens can also check the TCVFD website at www.tcvfdkerrco.org for Burn Ban status.

What could have been a disastrous event, with massive damage and possible injuries was mitigated by the efforts of an almost entirely volunteer response.

“The majority of the responding firefighters were from volunteer departments,” Gordon said. “These are men and women who choose to serve and protect their communities. We all have jobs. We don’t get paid to be there, but it is who we are. It is in our blood to want to help.”

Kerr County is made up of more than 1,100 square miles, most of which is rural areas located in unincorporated cities. There are seven volunteer fire departments serving each of these areas spread out across the county.

“Having departments like ours set up around the county is so important and drastically reduces response time,” Gordon said. “In addition, we are training constantly to provide safe and effective service to our community.”

As TCVFD Chief, Gordon said he recently participated in National Emergency Management classes that prepared him for the last week’s brush fire effort.

“The NEM training was extensive and taught us how to properly execute the command operation we used on the Fall Creek Fire,” Gordon said. “Several of our firefighters have completed Texas Fire Service training. It is a dangerous job and we want our firefighters to be properly prepared and safe.”

Most volunteer fire departments host fundraisers and rely on public donations to operate, receiving limited funds from the county governments in which they operate.

“We are blessed to have the support of our community,” Gordon said. “In order to do a good job, we need the proper equipment, and the donations over the years have allowed us to have trucks and safety gear we use today.”

As for last week’s operation, Gordon said he was very pleased and appreciative of each responding department.

“Everyone worked really well together and the operation went smoothly,” Gordon said. “Some departments sent several firefighters and others sent a few. We had guys jumping on other trucks to rotate manpower. We were able to get the fire out. We didn’t lose a single structure and no one was injured. I am extremely proud and grateful.”

Gordon said he was also grateful to a couple of local businesses that stepped up to assist.

“I would like to thank Miguel & Leugim Tire Shop in Comfort for coming out to repair a tire on one of the brush trucks,” Gordon said. “And I would also like to thank Hill Country Septic for providing a portable bathroom for our women on [the] scene.”

Since Thursday’s fire, Gordon said his department was called out to two additional brushfires.

Toxic substance or water supply? Lawmakers to weigh whether wastewater from oil fields could replenish the state's aquifersDrag race expected to attract hundreds of Kerrville visitors